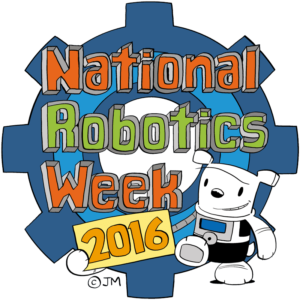 For a very small group Robot Garden has the most National Robotics Week activities in the whole US. But that’s hardly surprising, Robot Garden is a maker space in Livermore California with a focus on robotics. The Robot Garden website describes it as a “family friendly community workspace that provides access to tools in a community of interesting people building amazing things”.

Robot Garden operates on the weekends out of i-Gate’s ‘The Switch’, a City of Livermore operated cowork space and startup hub.

The community around Livermore is full of interesting people. It’s just up the road from Silicon Valley and is home to Sandia and Lawrence Livermore National Laboratories, so the average person in the area is likely to be a laser scientist or developing novel textiles. But not every group member is local to Livermore, some travel over 50 miles or attend via telepresence robot.

Retired cybernetics engineer Lloyd who comes from Lodi said, “I came to work on my robot. With the group. It’s about meeting with people, getting some questions answered.”

Software engineer Jayson said, “Robotics isn’t a one person job. Joining a different makerspace didn’t fulfill the need of being able to work with people that wanted to build robots. And maybe I know some software I could teach them, they know some electrical engineering they can teach me. Someone else might have the physics background to teach all of us.”

Or just an informal background but plenty of interest. Arlin comes to Robot Garden to combine his interest in home automation and the environment. Arlin describes himself as ‘nontechnical’.

“I just dabbled in programming since college. Aside from a few basic college courses I’m mostly self taught. I’m a tinkerer. I like to make things work.”

“Robots are the tools of the 21st century,” says Robot Garden cofounder, Andra Keay. “We wanted to have a place where adults could firstly, get inspired about robotics, and then effectively reset their skills. And most of us have families so we also wanted a family friendly space where our kids could extend on the limited STEM curricula at school.”

Many members brought their children along and while Lego Robotics was popular with the youngest, the teenagers gravitated into a Minecraft modding group. It certainly looked like the adults had plenty of toys to play with too.

“Lots of stuff to do. Lots of stuff to make. I love the 3D printer. I love the 3D modeling. I love the CNC routing. All of it. There’s just so much you can do and I always have ideas for things to do,” said Janelle Dahling, IT tech manager by day and ‘queen of the machines’ at Robot Garden. “Robotics is going to be the future and I want to be part of it.”

Here’s a selection from the events on the Robot Garden calendar during National Robotics Week. Some of them were one off, but most repeat every week and some include people telepresencing in (robot optional) from other countries.

(Not Just) Robot Swap Meet – where everyone could swap their unwanted electronic components. Because one person’s junk is another person’s treasure.

Arduino Day Birthday Party – celebrating the 12th anniversary of the Arduino microcontroller. Marco who organized the Arduino Day party and provided a lot of the robots, said that it was  “an opportunity to showcase what arduinos can do, and hopefully get different people involved.”

Programming Robots Study Group (PRSG) – learning ROS and designing an affordable open source robot that will run ROS. The group started out focused on the programming but discovered the need for an up to date shared reference platform. The study group meets weekly but you can join the discussion community online.

Software engineer, Robot Garden President and PRSG organizer Fred Douhit said that he was really proud of the the PRSG group as it brings together so many diverse and deep thinkers about robotics. “You know programming in 3D, impacting the real world, has always been of interest to me and I guess that’s why I like robotics.”

Open Source Robot Arm Group – is working on developing Drawbot in association with the open source robot arm community. Join the robot arm project! The group meets using hangouts so you don’t have to be at Robot Garden to participate.

Lego Robotics Club – say no more! It’s a very popular weekly club. And Introduction to the Robots is a monthly showcase of the robots available at Robot Garden, ranging from quadcopters, robot arms and telepresence robots, to educational robotics for all ages including ROS reference platforms like Turtlebots.

There was also a Minecraft Server Group which appealed to a younger demographic. But some of the best activities at Robot Garden aren’t planned. On this Saturday, Scanse cofounder Tyson Messori dropped in to give an impromptu demonstration of Sweep, his affordable scanning LiDAR sensor. Sweep is currently on Kickstarter and close to making target.

Daron, a Livermore Labs engineer said “The kickstarter guy who showed up was really interesting to me because I’m really interested in LiDAR for my next gen robot. I just love the camaraderie at Robot Garden. Talking with other roboticists about the possible. ”

Robot Garden is interested in hearing from other groups who’d like to be part of a Robot Garden global , , … well, robot garden just says it all.