Team KAIST from Korea have won the DARPA Robotics Challenge, held at the Pomona Fairplex in California on June 5th and 6th. KAIST was closely followed by Team IHMC from Florida and CHIMP from CMU. All three teams scored the maximum 8 points in one or other of the two final rounds, where robots had to complete 8 difficult tasks within one hour, including a surprise task. With 3 teams scoring maximum points, the contest became a race.  KAIST was able to complete the whole challenge in only 44 minutes. With this robotics Grand Challenge, DARPA has advanced both the science of robotics and the story.

In the 2013 trials of the DRC, only 18 months ago, the 16 qualifying teams were allowed a half hour for each challenge task and could reset the robots between each task. Robots were also tethered to power supplies and in constant communication with robot operators. Only 13 of the 16 teams scored any points; only 4 teams scored points driving the car; and only 3 teams scored more than 50% of the points available. 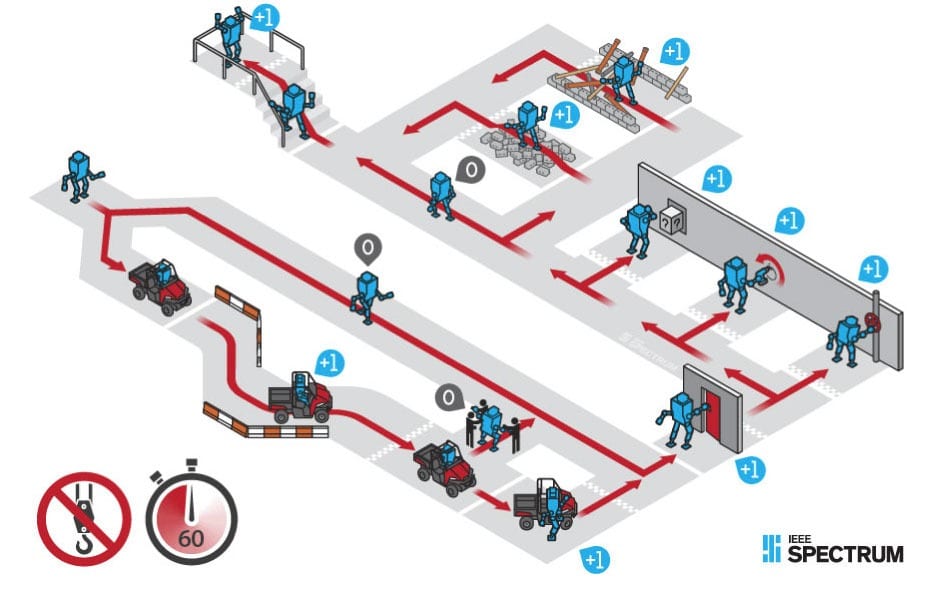 Fast forward to the 2015 finals where 25 teams qualified and 23 competed. Teams had to complete all 8 tasks within one hour, while carrying their power on board. Communications between robots and operators were degraded during much of the challenge to imitate real life disaster conditions. In spite of the big increase in difficulty between trials and finals, 19 teams scored points, 18 attempted the drive and 10 teams scored more than 50% of the available points.

Interestingly, one thing that didn’t change much from trials to finals were the team placings, with half of the top 6 teams staying in same rank as in 2013. While CMU’s Chimp had a strong lead after Day One, they were unable to repeat their success or improve in rankings and were overtaken by KAIST and IHMC. I’m sure this is much to the chagrin of CMU, who have a history of being pipped after early leads in Grand Challenges.

Grand Challenges have a long history of spurring technological innovation. Gill Pratt, DARPA Program Manager and Robotics Challenge Organizer, expects that the DRC will bring advancements that were 10 to 15 years out into the realm of commercial or successful application. The DRC will “transform the field of robotics and catapult forward development of robots featuring task-level autonomy that can operate in the hazardous, degraded conditions common in disaster zones.”

Real robots did useful things, like operate power tools, drive cars and climb stairs far more successfully than we anticipated. But at the same time, we watched robots have incredible difficulty performing simple human tasks. For example, RunningMan, the 2nd place finisher from Team IHMC, fell over while waving to the crowd after successfully completing all 8 tasks.

Another fun fact, the teams with best performances in DRC largely all used ‘transformer’ style non-humanoid robots. RunningMan from IHMC was the exception rather than the rule, being an Atlas. KAIST and CMU transformed from bipedal to wheeled or tracked, and CMU’s Chimp was the only robot able to right itself after a fall. RoboSimian used all 4 limbs and any body orientation it wanted to accomplish tasks, demonstrating that non-humanoid robots are both more successful at operating in human environments and just as capable of pleasing the crowd. 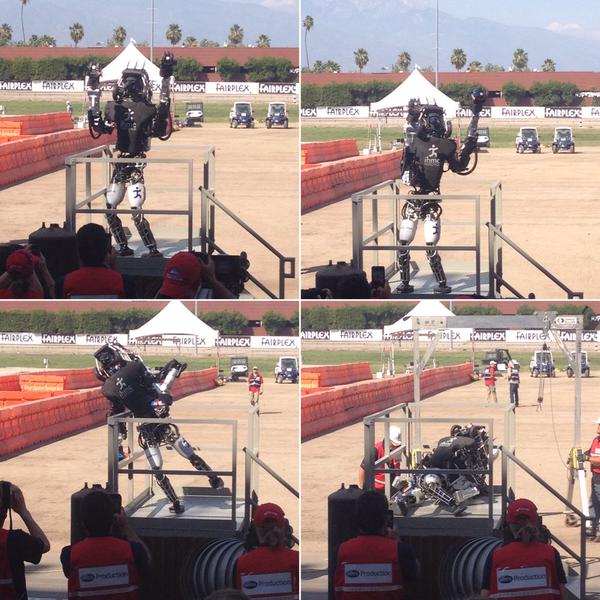 So we can forget the “robot apocalypse”! State of the art robots stumbling over simple tasks are the new meme. DARPA even released a 1 minute showreel of robot pratfalls set to the 1812 overture. It’s brilliant PR! And while much of the world may have other interests, from survival to the latest celebrities, anyone who is worried about robots stealing their jobs, or killing us in our sleep, can sleep a little sounder tonight.

Rodney Brooks said at the DRC that “Anyone who is worried about the robot apocalypse just needs to keep their doors closed.”

If we were keeping score, then the doors definitely beat more robots than any other challenge. Some robots just stared at the door for most of the round. Some fell over trying to open the door. Others managed to open the door, then fell over trying to get through. Those doors were tough. Some robots (like MIT’s Atlas) actually got a point just by falling out of the car or through the door – because they landed across the designated finish line.

Rodney Brooks understands the power of a good story. His company Rethink Robotics has crafted a positive robotics message – that collaborative robots can work alongside people and in the process reshore US manufacturing  and make small factories viable. But that is just one company, one robot. It’s a drop in the bucket compared to the hype and sci-fi robots that we are usually exposed to.

Most of the world only sees fake robots in sci-fi movies like Terminator, Chappie and Ex Machina. Some people may see short research robotics videos on youtube, without context. And others may enjoy the popular robot combat events, like Battlebots, RoboGames etc. No wonder real robots are so often a disappointment. But times are changing. I overheard the arena staff in conversation at the DRC;

“You mean they aren’t fighting robots?”

The story is out. Robots are ready for the real world, in limited but potentially lifesaving roles. They aren’t superhuman, in fact, they won’t be replacing people any time soon. But they are capable of some useful things and they are fun to watch even if they don’t fight, they just fall over. The crowd at the DRC was very mixed in terms of ‘robot awareness’ but we were all captivated, we gasped and cheered.

“These robots are big and made of lots of metal and you might assume people seeing them would be filled with fear and anxiety,” Pratt said. “But we heard groans of sympathy when those robots fell. And what did people do every time a robot scored a point? They cheered! It’s an extraordinary thing, and I think this is one of the biggest lessons from DRC—the potential for robots not only to perform technical tasks for us, but to help connect people to one another.”

Who here believed that real robots would make for an interesting spectator sport? I watched the first trials, just 18 months ago, and it was like watching paint dry. DARPA, you set the bar high and all the robot teams delivered! Congratulations to you all!

But let’s lift the bar again at the next Grand Challenge. Teams were claiming that their diverse backgrounds gave them an edge over the competition, however, diversity doesn’t just mean competitors from different countries, universities or disciplines. Diversity means many things including seeing more women in robotics. Raise the bar higher again, DARPA. It’s a strategy that obviously works. 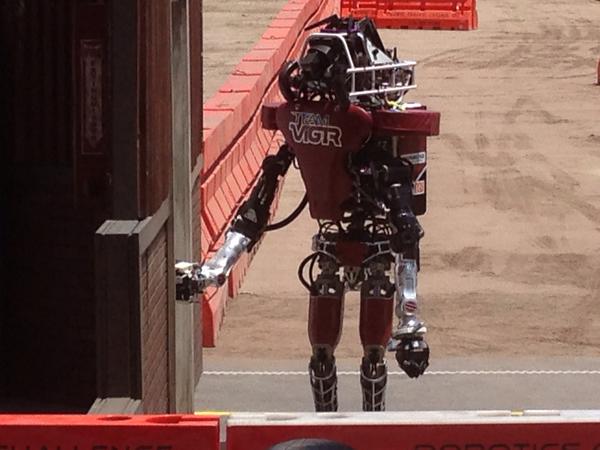 “Knock, knock!” #DARPADRC via @svrobo Robotics is entering the real world thanks to DARPA Robotics Challenge.