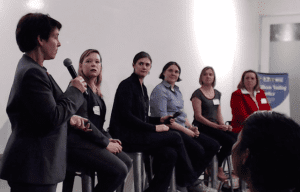 It’s like Rosie the Riveter all over again. Robotics companies are hiring madly and the best startups are proactively looking for women. The first SVR Influencer event on April 29 at IDEO SF brought together 5 female robotics experts, Katherine Scott, Erin Rapacki, Melonee Wise, Steffi Paepcke and Dale Bergman, all sharing their opinions about the challenges and opportunities in Silicon Valley. The strongest message was “We’re hiring!”.

With Melonee Wise launching Fetch Robotics today it’s no surprise that her thoughts are on hiring. Melonee managed to launch not just one but two logistics robots in a mere 8 month turn around from funding to Fetch and Freight. Fetch, a one armed picker and the mobile autonomous base unit, Freight. The mobile base unit can deliver picked goods much quicker than the full unit can, making the deployment of a combination of robots in several warehouse roles viable. 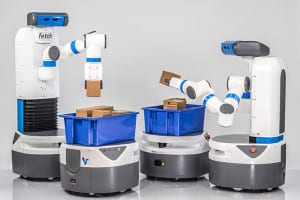 Says Wise, “We were got funding from Shasta Ventures and OATV about 8 months ago, and then we didn’t really sleep or see other people for the next 4 months. Then we had the basic robots and have been working on pilot software, so that people can see them in operation, and see what they can do. They are designed to be logistics robots. There’s a huge need for workers to do pick and pack. Basically, every time you order just one thing from Amazon… that’s a huge problem! And demand is growing while companies’ ability to meet the need is falling behind.”

But it wasn’t just the startups on the panel, Fetch Robotics, Tempo Automation. The more mature robotics companies, Suitable Technologies and Intuitive Surgical were also on the hunt, as were companies who proactively attended the #SVRInfluencer #WomenInRobotics event specifically to look for job candidates, ie. SRI International, Krtkl, Modbots, Pneubotics and others.

We didn’t plan for the evening to focus almost entirely on employment but that’s what was on everyone’s mind. Many audience members brought resumes and peppered the panel with questions about how to apply, to pitch or what to put on their resume. Some of the comments made by the panel were: