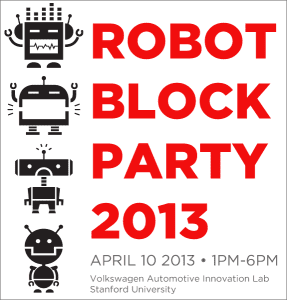 The robots return to Stanford on April 10 during National Robotics Week. The Robot Block Party is an annual robotics festival organized by Silicon Valley Robotics, with Stanford Robotics Club and the Stanford Center for Internet and Society (CIS). The Robot Block Party runs from 1pm to 6pm on Wednesday April 10 at VAIL, the Volkswagen Automative Innovation Lab, home of DARPA Grand Challenge winning self-driving cars.

2ooo people came to the 2012 Robot Block Party, to see more than 30 companies and groups on exhibit, making this one of the largest festivals of National Robotics Week. Since commencing in 2010, National Roboitics Week has grown in size, with all 50 states hosting events in 2012. National Robotics Week is a federal initiative to celebrate the US as a leader in robotics technology development and to educate the public about how robotics technology impacts society, both now and in the future.

There will be robots from companies across a range of verticals including health, industry, transportation, education and entertainment at the Silicon Valley Robot Block Party. The robots can be as large, complex and expensive as a PR2 or Intuitive Surgical’s Da Vinci, or as small and accessible as EZ-Robot’s ‘box of robot bits’ which allow anyone to turn anything into a robot. As always there’ll be dancing robots, roaming robots, space robots and flying robots. This year there will also be swimming or aquatic robots as the local chapter of AUVSI, the unmanned vehicles association, will be bringing a pool to showcase ROVS.

Some other companies involved in the Robot Block Party include Adept, Bosch, Bot & Dolly, EksoBionics, Intuitive Surgical, Liquid Robotics, NASA, Neato, Redwood Robotics, SRI International and Willow Garage. While some of the robots and companies are well established, the Robot Block Party will also be showcasing robot startups in the ‘Startup Alley’ where companies like Blue River Technologies, Origami Robotics, Foldimate and Sun Synchrony will demonstrate technologies that are just coming to market. Puzzlebox will be showcasing their brain controlled helicopter which was a super successful kickstarter and one of the hits of CES 2013. Puzzlebox is also working on brain powered wheelchairs.

National Robotics Week also aims to advocate for increased funding for research and development and to inspire students of all ages to pursue careers in robotics and other Science, Technology, Engineering, and Math-related fields. Many STEM organizations will be running activities at the Robot Block Party, including the Robot App Store, Playing at Learning, Techy Kids, Barobo and the Tech Museum.

This year, the Robot Block Party will also hvae a job fair session between 12 and 1, where job seekers can mingle with the robotics companies exhibiting and drop off their resumes. Silicon Valley Robotics will be taking resumes and posting job opportunities throughout the day and on SVRobo.org . Robotics is one of the most in demand skills the current and future workforce – being as much in demand outside of robotics as inside – according to Rich Mahoney, Director of Robotics at SRI International.