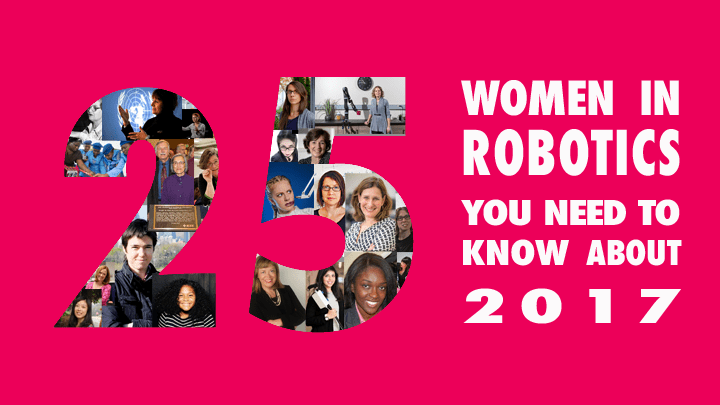 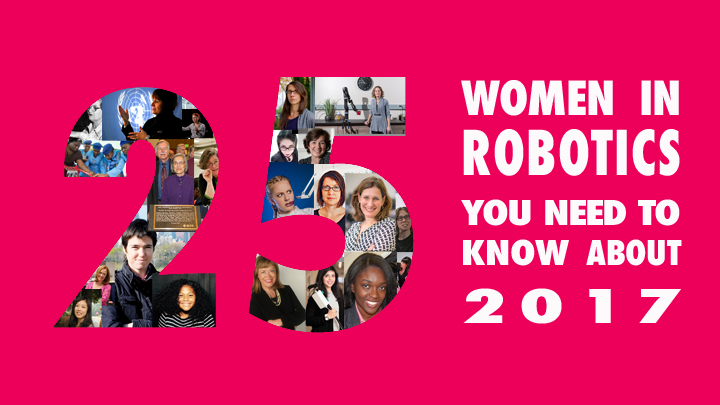 Ada Lovelace Day on October 10 2017 is a day to celebrate the achievements of women in technology and there was no shortage of women to feature on Robohub’s annual Ada Lovelace Day “25 women in robotics you need to know about” list. (If you don’t see someone you expected then they’ll probably be on next year’s list, or on our first four lists from 2013, 2014, 2015, 2016 – please read them too!)

This year we are featuring women from all over the world, including early stage entrepreneurs, seasoned business women, investors, inventors, makers, educators, and organizers; we also feature early career researchers, established academics, senior scientists and politicians. The unifying characteristic of all these women is their inspirational story, their enthusiasm, their fearlessness, their vision, ambition, and accomplishments. Every year we’re inspired and hope that you are too.

It’s been a roller coaster year of tough headlines for tech diversity … In February, engineer Susan Fowler wrote a blog post “Reflecting on one very, very strange year at Uber. For some it was a wake-up call to the sexual harassment in tech culture, and for others it was just a public confirmation of what was already well-known. A series of high-profile mea culpa’s from male investors and CEOs ensued; then James Damore was fired from Google after implying that biological differences — not sexism — lie behind the gender gap.

It seems negative, but the publicity around bias, harassment and lack of diversity does provide public vindication for women like Susan Fowler, Tracy Chou, Erica Joy Baker and Ellen Pao who took stands against sexism and suffered for it. We’re now starting to see some positive outcomes. For example, Ellen Pao has just released a book, Reset, about her experience suing a prominent venture capital firm for bias and says, “My lawsuit failed. Others won’t.”

This year, Ellen Pao, Tracy Chou, Erica Joy Baker joined other women fighting against sexism and racism in the tech industry by starting Project Include, a non-profit that uses data and advocacy to accelerate diversity and inclusion solutions in the tech industry. Tracy Chou was also named as one of MIT Tech review’s Innovators under 35 alongside some 25 Women in Robotics alumni – Angela Schoellig [2013] and Anca Draga [2016].

Women in robotics still face challenges, even danger, such as Stella Uzochukwu-Denis and her fearless female robotics students face from Boko Haram extremists. And we all face the relentless lack of diversity and general apathy about the gender gap in our daily workplaces.

And yet robotics itself faces huge challenges. We are a very small segment of the very rich tech industry and robotics startups struggle to attract great talent. We have an opportunity to improve our diversity hiring practices to gain more recruits as well as increasing our internal innovation capacity, something that Linda Pouliot of Dishcraft writes about with elegance. As Pouliot notes, if you’re a robotics startup looking to hire, your personal network is your biggest asset — yet another reason for women in robotics to know about each other and to network, like with the Women in Robotics organization.

Speaking of networks, we’re biased towards the countries and careers that we know well. It’s a challenge to provide a representative sample of the wide range of jobs around the world that women are doing in robotics. Perhaps you can help us for next time with more nominations from other regions? Email nominations@womeninrobotics.org with suggestions.

Without further ado, here are 25 women in robotics you should know about (in alphabetical order) for 2017. Enjoy!

Do you have a story to tell about how visibility helped your robotics career? Would you like to nominate someone for next year’s list? Do you want to help organize Women in Robotics events or join the Women in Robotics network? We’d love to hear from you. Know of any great women in robotics who should be on this list next year? Check the lists from our previous years (2013, 2014, 2015 and 2016), and feel free to leave your nominations in the comments section below, or email us at nominations [at] womeninrobotics.org.

If you liked this article, you may also be interested in:

See all the latest robotics news on Robohub, or sign up for our weekly newsletter.

Sabine Hauert is President of Robohub and Assistant Professor at the Bristol Robotics Laboratory.. read more