The inaugural World of Drones Congress will be held in Brisbane this week from 31 August to 2 September 2017. The congress includes a conference, expo, tournament and outreach and the goal is to connect the Asia Pacific economy into the new drone industry. With over 70 speakers, World of Drones looks like a big event and is sponsored by Advance Queensland, the Queensland Government and QUT.

Advance Queensland has a $10 million investment in technology, of which $1 million is earmarked for drones. As Queensland Premier Annastacia Palaszczuk said, “The funding will help develop and test cutting−edge RPAS technologies used to monitor infrastructure across critical industries, including LNG, agriculture, mining, energy, telecommunications, and environmental management. This includes our first−of−its kind partnership with The Boeing Company, in conjunction with Insitu Pacific, Telstra and Shell’s QGC project, which will create one hundred new aerospace industry jobs in Queensland.”

And yet the idea really started with some passionate people, in particular, Dr Catherine Ball, the CEO of Remote Research Ranges in Australia. As I’m currently in Brisbane to speak at World of Drones and Robotronica, I thought I’d ask Catherine what was involved in starting a global robotics conference! 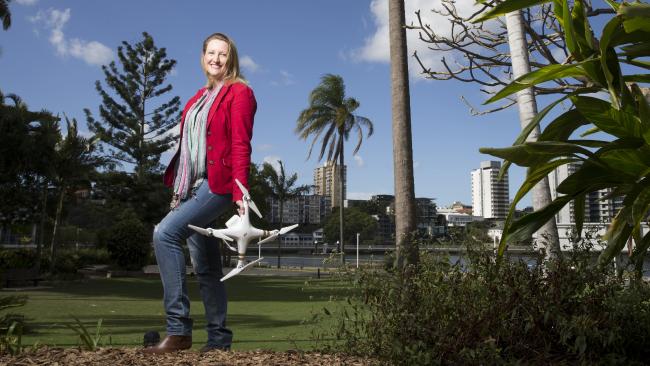 Andra: Not many people wake up one day and decide to start a conference. Can you first tell us a little bit about what World of Drones is, and then, why you started it?

Catherine: I am one of these people that if you see it, you own it. I have to admit to feeling rather frustrated in the lack of business conversations around drone technology, and can see massive potential in drones as part of business and economic growth, especially for Australia. So, about 3 years ago I thought we should have a business, legal, investment, and ethics conversation around how we can use this technology to keep people safe and generate new sources of revenue. No one else was doing this, so I thought I should put it out there, and luckily I met some serious business partners who agreed with my vision.

How does Australia’s robotics ecosystem compare to that of other countries?

In Australia we are able to ‘punch above our weight’ in many areas, but these are still very siloed and isolated. So, though we have some champion projects and people I still feel there is a lack of connectivity. And we could do better if we collaborated better. Australia doesn’t have a large population compared to the USA or parts of Europe; so we need to really add value to the projects that happen by diversifying and expanding the reach. We also have a gender diversity issue in the robotics ecosystem here, and across the technical sectors in general, and it is not really improving- Australia has slipped in the global gender diversity index in the past few years.

What do you think could improve Australian outcomes? And what would you like to share with other countries?

Australia is a perfect test bed for collaborations, I would personally love to see more International collaborations. For example, with the drone industry, we have airspace regulations and legislations that allow for trials, tests, and training that other countries just don’t have yet. Need your safety statistics to prove a case? Come and trial your equipment in Australia!

What first inspired you to robotics and drones?

I am rather in love with the data that drones can collect, and also very keen to support the health and safety benefits of using robotised or automated systems to keep people safe. The application of robotics and drones in particular first sang to my heart when I saw the types of imagery we were able to collect without disturbing the environment we were sampling; avoiding sampling bias is a key goal of any ecologist. I had noticed the advancements being made in the drone world were never really focussed on the “drones for good” applications, and I thought this was a real shame, and that we were going to potentially miss massive opportunities if we didn’t have these conversations at the start of the burgeoning commercial use of these types of robotics.

In general, I see the 4th industrial revolution as the most important liberation of people from dull and repetitive tasks; we have a moral obligation to take on technologies that will potentially save lives, e.g. ‘driverless’ vehicles.

Having survived a car accident I would love to see some more smarts and autonomy being applied to cars.

Has this been harder or easier as a woman? Or do you think that that question just distracts people from your achievements?

Gosh, you know it is a hard question to answer, but let me put it like this: most of the time in the past I have been the only woman in the room. Most conferences I have attended I have been the only female speaker, and looking at some other organisations there are either no women, or just one woman. Other conferences I have seen organised in Australia around drones recently has been no female speakers at all. So, as anyone can tell from some of the industry behaviours that women are just not seen to be there, so we can take from that what we will. Here in Australia we have the added issue of ‘Tall Poppy Syndrome’ which I do think affects women worse than men, especially in the cultures that are demonstrated by some of the references I have just mentioned.

I live my values, and so World of Drones Congress is about 50:50 for gender diversity, filled with excellent and technical people from across the globe. #BeTheChange

Tell us about some of your recent achievements/awards?

I have been so lucky to have received awards from the business and technical communities around the work I have been doing for the past few years. It is humbling to be recognised for things that are hard work. In 2015 I won the National Business Woman of the Year (corporate) award; this enabled me to go independent and work on the projects that I really cared about. I now own/co-own 5 start-up/small businesses, all of which are in profit…it has been a major learning curve to go from technical to business without any formal training between the two. I am also grateful to be supported by a wide range of people across government, business, and academia and feel so lucky to wake up every morning and love what I do.

What would you tell your younger self today?

It’s all gonna work out quite alright in the end (especially told to myself during my PhD experience – but that’s a different interview altogether).

What would you like people to know about the World of Drones event?

World of Drones is a game changing group of people and conversations. Check out our Speaker List; I am so proud of this crowd. It is going to be a different set of conversations which will open up pathways and put protocols in place to really professionalise the drone industry and take it to the next level of business. Hope to see you there!