Renowned technology commentators and authors John Markoff, Jerry Kaplan and Martin Ford entranced the audience with their perspectives on robotics, automation, AI and the impact on society. The event at IDEO on July 16 was one of a new series of salon talks organized by Silicon Valley Robotics to create a venue for enjoyable, intelligent and informed discussion around the important issues in robotics and AI.

Event organizer Tim Smith of Element Public Relations said that the evening was about putting the AND back into the human-robot dialogue.  Stating: “Robots OR humans is a false dichotomy.”  But before the discussion could even start to touch on whether or not the issue was automation rather than robotics, the speakers explored some of the basic economic premises or myths around jobs and technology.

The discussion continued with many interesting offshoots from ‘grandpa in a box’ and the Singularity, to feudal societies and ancient Egypt. Markoff asked whether Keynes was right or wrong? The answer was ‘right AND wrong’, or as the other speakers said, Picketty is right and Jerry Kaplan just became a neo-marxist instead of a market capitalist.

The audience had many questions for the speakers and 90 minutes passed very quickly. Some attendees took home signed copies of Martin Ford’s most recent book, “Rise of the Robots” and Jerry Kaplan’s book “Humans Need Not Apply“. John Markoff’s book “Machines of Loving Grace” will be available in August and he’ll be talking at the Computer History Museum in Mountain View on August 27. 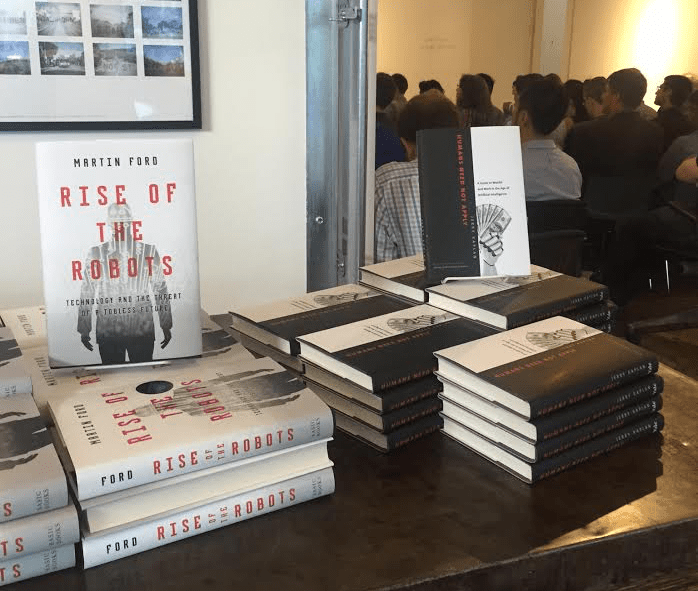 After the event, Martin Ford said it was a pleasure to talk to roboticists in a constructive discussion, without it overly pushing agendas or becoming polarized. That sums up the inspiration for the SVR Influencers series – to bring important issues in robotics out for an informed discussion in a small salon setting.

The event was the second in Silicon Valley Robotics Influencers Series. The first event focused on ‘Women in Robotics’ with 5 incredible role models sharing some of their story. The next event in September will be “Robots and Film” with speakers including Dav Rauch, who designed the vision of films like Iron Man, Transformers and Avatar. Future topics will be about robots changing human behavior and space robotics. To stay informed on future events you can follow the Silicon Valley Robotics calendar, or sign up for our newsletter.