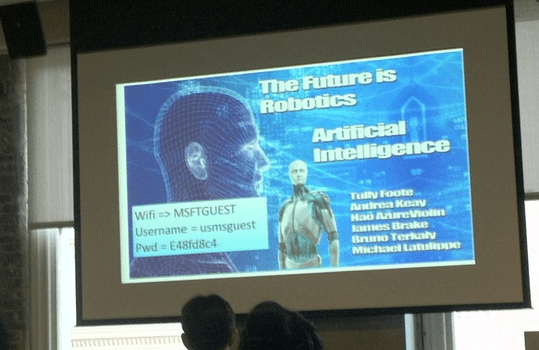 More than 300 people turned out last night for the BASE “The Future is Robotics” event hosted at Microsoft SF. The Bay Area Software Engineers group has regular meetups but this is the first event to focus solely on robotics and was a full house. “It was like a TED talk but without having to pay the TED ticket price, ” said one attendee. BASE organizer, Michael Latulippe arranged a smorgasboard of robotics speakers with wide ranging appeal for an audience primarily composed of software engineers, with a few robotics professionals and enthusiasts.

Bruno Terkaly, Microsoft Developer Evangelist and Azure specialist, spoke about the increasing role of robotics in his talk “Why Platform as a Service will Rule the World”and how Microsoft’s cloud computing platforms can help us stay one step ahead of the increasingly automated world. “Cloud computing is once such area that stands to gain tremendously with this phenomenon. Traditional IT shops are redeploying IT workers to other activities that provide better business value. Microsoft is working hard to improve automation in the cloud.”

Elad Inbar, Robot App Store, outlined some of the possibilities for software engineers writing apps for robots, with plenty of questions from the crowd, in his talk “Why the robotics community growth depends on us, software engineers”. He also demonstrated an Aldebaran Nao and the developer environment. Nao’s dancing skills were put to the test and as usual, Nao was also very popular.

Hao Zhang, Dorabot, demonstrated some of the progress he’s making on the open source household robot project, Dorabot in his talk “The Future of Open Source Robots”. The goal of the Dorabot project is to create not just a household robot, but one that is fully open source, with customizable plans that you can make on easily accessible maker equipment. Rather than a $20,000 price tag, Dorabot wants to be less than $2000. Rather than taking 20 years to develop, Hao predicts that Dorabot will be ready in less than 2 years.

Tully Foote, ROS Platform Manager at Willow Garage, described how robotics is leveraging the open source model, ROS and PR2s to fast track advances that are robust and repeatable in his talk “Developing Open Source Robotics with ROS”. He also kept everyone entertained with stories about the DARPA challenges and their role in directing research developments. Naturally, Tully also had to field a lot of questions about programming languages and the structure of ROS.

Andra Keay, Silicon Valley Robotics and Robot Launchpad, gave an overview of both groups and the current and emerging trends in robotics in her talk “The Future is Robotics in Silicon Valley”. Outlining how Silicon Valley is at the epicenter of some of the most exciting new developments in robotics and why Robot Launchpad was founded as a bridge between the software and mobile entrepreneur community and robotics. Naturally, there was discussion of the launch of Baxter from Rethink Robotics and Andra described the emergence of similar robots in Silicon Valley, such as those from Redwood Robotics, Meka, SRI International and Adept, plus some of the more futuristic technologies in cardboard and inflatable robots.

James Brake, Menu GuruS, closed the evening with his talk on “Robots in Restaurants” which also outlined a philosophy for making the world a better place through automation. Menu GuruS is a software system focused on how to get your robots and other high end automation systems easily integrated into the world’s 12 million restaurants. Not only does his new company MenuGuruS save your developers time it also provides you a clear marketplace to sale to the worlds 12 million restaurants.

I’d like to thank Michael Latulippe and Bruno Terkaly for organizing and hosting such a massively successful evening. Software engineers are one of the primary reasons that robotics companies, who’ve done their research and manufacturing elsewhere, relocate to Silicon Valley. There should be more events celebrating the importance of software to robotics, and robotics to software. 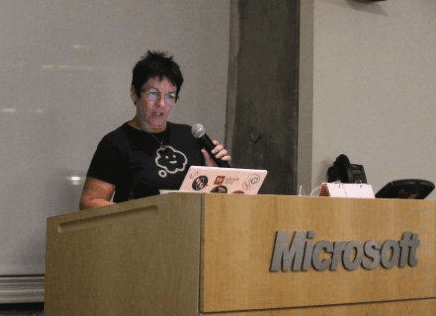