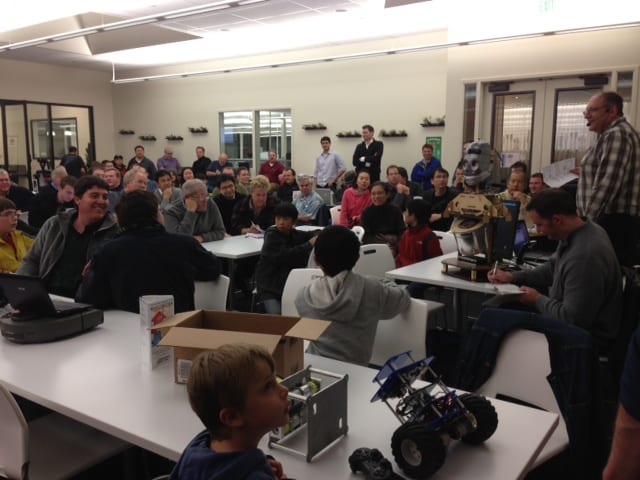 I spoke about Silicon Valley Robotics at Google HQ last night to the monthly Homebrew Robotics Club meeting. The crowd was 135+ which was one of their largest ever meetings and the first half of the meeting was given over to robot show and tell, which ranged from Kentucky bots built by kids for the Homebrew tabletop challenge, to Magellan robots for Robogames, to Double Robotics successful kickstarter project. It was inspiring to see the level of robotics that everyone aspired to – especially the children!

I was also able to talk about Robot Garden, our new robotics hackerspace in Livermore, and had the pleasure of meeting David Crawley, who’s doing a “Build your own $500 robot” group at Hacker Dojo on Saturdays – also known as “Robot Hacking – the 12 tasks of Hercules”. So, here’s a shout out to a great project if you can get down to the Peninsula on Saturdays. Plus Hacker Dojo is moving so only one more week at 140a S Whisman Ave, Mountain View before moving to their new venue at 599 Fairchild Drive, Mountain View. “If people have questions they can call me (David Crawley) +14153098966.”