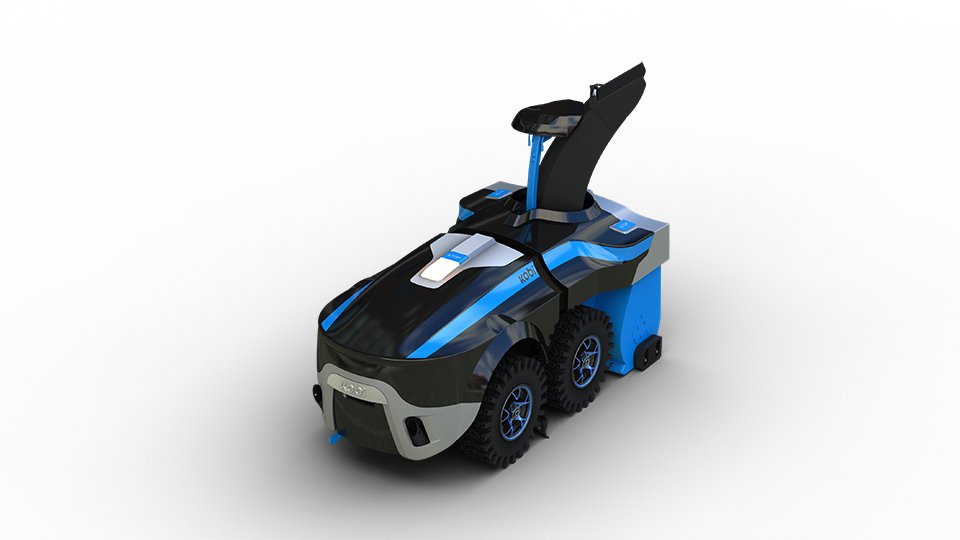 The Kobi Company walked away with the $5000 check from Siemens’ next47 at the Silicon Valley Robotics Pitchfire at RoboBusiness for their 3 in one snow blower, leaf muncher and lawn mower. Another robot for the garden, from Franklin Robotics, was the runner up according to judge Jason Sydow from Siemens’ next47.

Emceed by Andra Keay, Managing Director of Silicon Valley Robotics, this year’s competition was judged by:

All the startups will receive Silicon Valley Robotics membership and mentoring, with The Kobi Company also receiving a feature in Robotics Business Review.

The Kobi Company has developed an autonomous robot for yard work that can maintain the lawn and remove snow and leaves. The Kobi Company says the robot does most of the work a contractor does, but at a fraction of the price and with the convenience of 24/7 service. They plan to sell 10 beta versions of the robot by the end of 2016, wait for customer feedback, then make improvements before starting higher volume production in 2017.

“All contestants pitched great products and concepts that truly support and are reflective of the advancements seen in the robotics industry,” said Brent Watters, RoboBusiness Co-Chair. “We’d like to congratulate The Kobi Company for winning this year’s Pitchfire and extend our gratitude and best wishes to everyone else who participated.”

Silicon Valley Robotics Here’s a look at what each of the 15 Pitchfire finalists have to offer.

Kadho has partnered with IBM Watson to create the Mochu Al-based teaching robot that helps children improve their language skills. Initially, Mochu will launch in China in early 2017 to help children learn English.

Kadho says the biggest issue with the current language programs is accessibility to native speakers and ease of use. Millions of children worldwide do not have access to proper language training centers, and even if they do, 80 percent of the teachers are non-native speakers.

Parihug makes electronically-connected teddy bears that let loved ones hug each other from a distance. Two people can be on different sides of the world, each with their own bear. When one is hugged, a suite of soft, fabric-based sensors detects the hug and transmits a message to the other bear. The receiving bear then hugs its owner with a gentle vibration. The bears allow loved ones to connect with each other when they physically cannot be together, and brings the humanity back into technological connection.

Parihug is working with the psychology department at Case Western Reserve University to get as close to mimicking the blast of oxytocin in the brain that a child would get by hugging a parent. There is a developmental window in early childhood when kids form the foundation for how they build relationships for the rest of their life.

Genesis uses proprietary software that takes an architectural blueprint held in a CAD file into the cloud and runs additive as well as subtractive manufacturing algorithms to create a time and material optimized robotic path.

Franklin Robotics has designed a solar-powered, autonomous weeding robot named Tertill. It lives in the garden and charges itself in the sunlight, patrols the garden, avoids plants and obstacles, and chops down emerging weeds. Setup requires only a fence around the garden and small plastic collars around seedlings; no wires or beacons are necessary.

And there’s no programming of any kind, and chemicals are no longer needed for weed control.  The robot also provides a mobile platform for collecting a rich data set about the garden, including: soil moisture, temperature, plant nutrition and local weather conditions.

The Kobi Company has developed an autonomous robot for yard work that can maintain the lawn, remove snow, and clean up leaves. This robot will free up your time so you can focus on the things you really enjoy.

The Kobi Company says the robot does most of the work a contractor does, but at a fraction of the price and with the convenience of 24/7 service. The Kobi Company will sell 10 beta versions of the robot by the end of 2016, wait for customer feedback, then make improvements before starting higher volume production in 2017.

Cubit is creating modular robotics kits that allow you to develop programs visually without writing any code, and snap together smart hardware without any soldering or configuration. Cubit consists of three integrated hardware and software components: the Cubit Controller, Cubit Smartwares, and our drag-and-drop app, Cubit Workshop.

Endurance wants to help students jump into robotics. And it’s doing this with its DIY SelfieBot, a program its bringing to schools to show students how to make their own robots based on tutorials. The SelfieBot DIY platform is a tool that empowers students to turn your mobile device into a smarter machine.

This is based off Endurance’s SelfieBot, which is a “smart stand” for smartphones and tablets – think of it as a mobile driven robot for telepresence. SelfieBot can, for example, simplify video calling by turning the phone to follow a speaker as he/she is moving. It can also be used to turn your mobile device into a baby monitor or allow students to virtually attend classes.

LUXROBO is developing a Robotics of Things (ROT) platform that allows users to use electronic modules to construct their IoT device; each module will represent one function. For example, a smart thermostat can built out of six modules. All you need is a WiFi module, LCD display module, dimmer module, battery module, temperature module and a servo module.

The World Health Organization estimates there are 372,000 drownings worldwide each year. The Lifeguard Drone is looking to drastically reduce those numbers by using drones that fly flotation devices out to swimmers who are in trouble.

A swimmer can rent this system at select beaches or lakes. Upon pressing an emergency button on the device, the swimmer can get a drone to fly over and drop a flotation device in seconds. Founder R.J. Tang has said the next step is to develop a version of the system that automatically detects when a swimmer is flailing about or sinking.

Scanse has created a scanning LiDAR sensor called Sweep that offers 360 degree sensing capabilities for just $255. The affordable LiDAR system is designed to help usher in the next generation of mobile robots and drones.

The 2D LIDAR system has a range of 40 meters, even outdoors. Scanse says that Sweep is based on a new time of flight ranging method that involves sending out laser pulses that are made up of a series of micro pulses. These micro pulses act as a kind of light based checksum, which allows the sensor to more easily correlate returning light to the known pattern, and achieve a phase difference measurement. This method is much different than traditional LIDAR, which uses a train of identical pulses to measure the phase difference between outgoing and incoming light.

Rokid is an IoT hub that uses AI and deep learning to bring your smart devices and experiences all together. It reimagines home automation by connecting the disjointed experience. It can turn on the lights, play your favorite playlist, order a car service and much more. You no longer need to pull out your smartphone and open an app to see the latest weather conditions, just ask Rokid to give you the latest forecast.

MOTI Nudge is a social robot aimed at Millennials struggling with a healthy life/work balance.  MOTI works firstly by having a physical presence, becoming what is known as an environmental cue, meaning every time you glance at MOTI you think of your habit. Then, every time you complete your habit, you let MOTI know though a satisfying push of his faceplate.

MOTI celebrates your small win with lights, sounds, and haptics. However, slack on your habit and MOTI might get sad, angry, or remain purely encouraging based on what motivates you best.  MOTI gets to know you – the better you get at your habit, the more his celebrations evolve, and MOTI’s reminders are custom-tailored to your particular blend of negative/positive reinforcement. MOTI also auto-detects who is falling of their habit and why.

The Semio software platform offers an out-of-the-box integrated solution (in the form of modular drivers) for the automated recognition (of a human user) and autonomous generation (by the robot) of social behaviors that are fundamental to natural, multimodal interaction. Such behaviors include speech, social spacing, eye gaze, gestures (face, hand, and body), turn-taking, and social touch. The processing of these behaviors can occur either on-board the robot or off-board in the cloud. 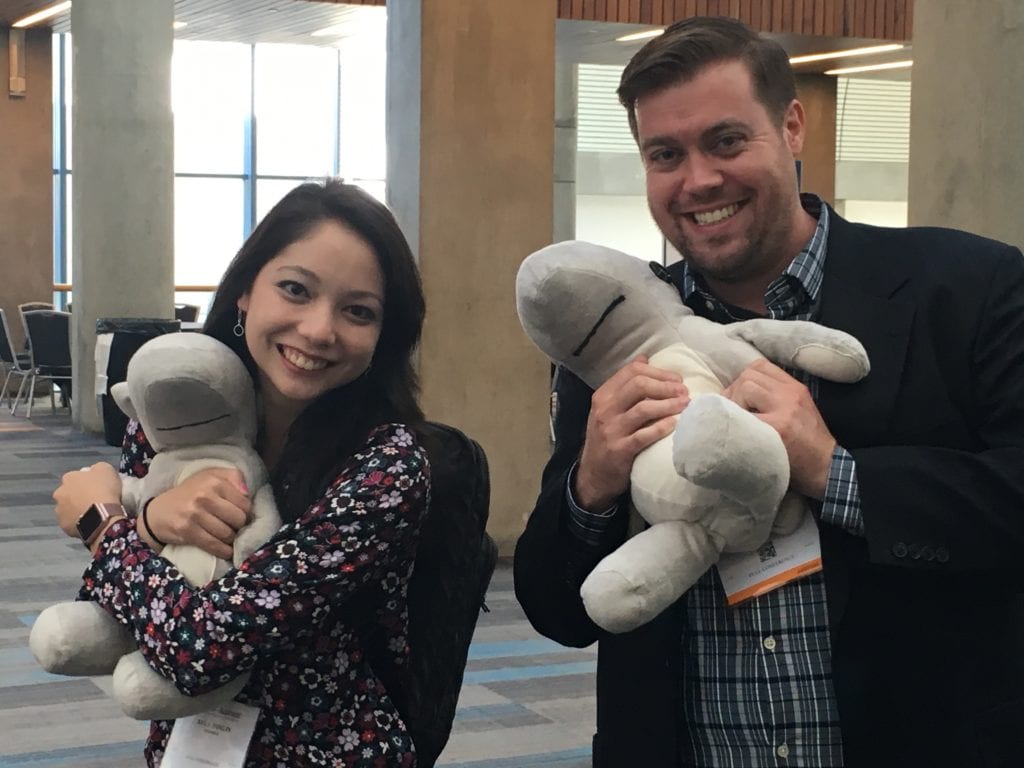 And all the startups were winners of our VC office hours event. 30 investors and venture capital firms came to the Silicon Valley Robotics RoboBusiness Office Hours to talk to startups. And the interest from startups was reciprocal. The waiting area was full all day as startups hoped for a walk in spot, although most had reserved meetings earlier. 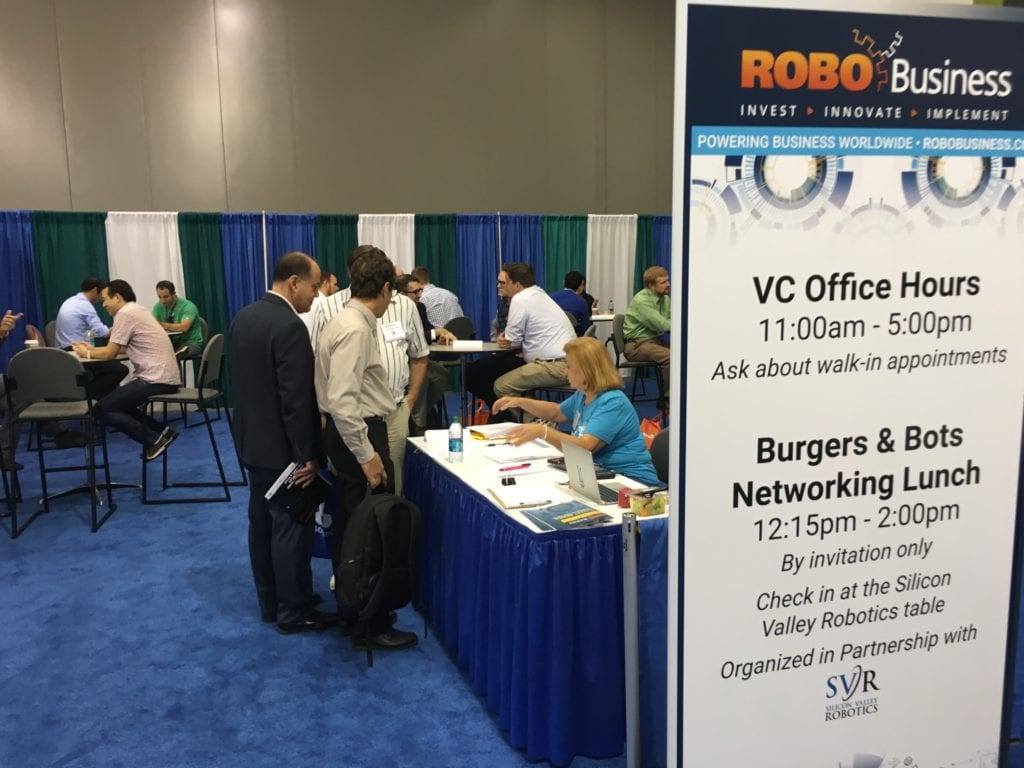 According to the startups, this was a fantastic opportunity to get introductions and insights as they fine tune their business model value propositions. According to the investors, the quality of robotics startups continues to improve. The only problem we had as organizers was that very few investors were interested in consumer robotics, with most looking for industrial applications in a range of markets, for software solutions and sensors, and for ‘Robots as a Service’.

See our follow up posts on the SVR Global Partner Tour and Silicon Valley Robots at RoboBusiness, and the Robotics Trends’ Pitchfire Summary.