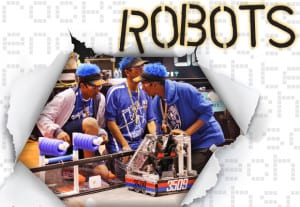 On March 11, FIRST® announced that its worldwide high school robotics competition, FIRST® Tech Challenge (FTC®), will be using the Qualcomm® Snapdragon™ processor as the platform for its robot and driver station controls. Moving to a communication and control system based on Android and Snapdragon will keep FIRST Tech Challenge students at the forefront of new technology developments.

FIRST teams will be using Java, a programming language built into more than 3 billion devices. “Current FIRST Tech Challenge teams can use their existing equipment in the exciting new platform,” said Ken Johnson, director, FIRST Tech Challenge. “A simple interface between Android devices and their current sensors and motor controllers will allow for a simple transition. Sensors built into the Snapdragon-powered devices will expand the teams’ options in future competitions as well.”

FIRST Tech Challenge is designed for students who want to compete head to head using a sports model. Teams design, build, and program their robots to compete on a 12’x12’ field in an Alliance format, against other teams. Teams are required to develop strategy and build a robot based on sound engineering principals, such as rapid prototyping and iterative design. 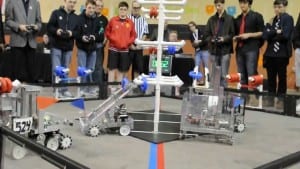 “In the foreseeable future, robotics will permeate our everyday lives,” said FIRST Founder, Dean Kamen. “Our FIRST students are ahead of the game as they are already adept users of three emerging technologies: sensors; 3D printing, and open-source software. Now that we are adding this mobile element to the already-robust FIRST technology equation – just watch what these kids will be capable of doing.”

Highly visible, key volunteers are needed to judge or referee at the FIRST Tech Challenge West Super-Regional Championship, presented by Google.   The top 72 FIRST Tech Challenge teams will be coming to the Oakland Convention Center between March 27-29.  This 3 day event will feature teams from the Western United States including Alaska, Arizona, California, Colorado, Idaho, Montana,  Nevada, New Mexico, Oregon, Utah, Washington and Wyoming. This event is highly prestigious for the teams to attend and their invitation was merit-based on strong performance at one of the 13 regional/state level championships around the west.

Training for either roles is a couple of hours (max) and consists of reading a reasonably short training document and taking a short certification quiz.    Additional on site training will be available as well.   We particularly need technical women and under-represented minority men in these roles.

Judges are needed Friday through Sunday between ~8am and ~6pm each day.

To learn more, you can visit   http://ftcwest.org/volunteer-information/
Have questions about volunteering,  email to Bill or Loridee at volunteer@ftcwest.org

On Friday morning 3/27, we are hosting a Diversity Breakfast celebrating the achievements of under-represented minorities and girls in the participating teams.

We invite you to sponsor this event by choosing one of the two options:

1.       Diversity Breakfast Lead Sponsor at $10,000. The sponsor will keynote during the breakfast and will be recognized in the event Program Book and other materials as an event sponsor. The Lead Diversity Breakfast sponsor will have the opportunity for a 10×10 booth available throughout the 3 day event and will be able to hand out promotional materials as well as receives 2 table sponsorships.

2.       Table Sponsor. Each table sponsor will host 6 students and 2 group representatives. Sponsorship ranges from $500 for college groups and engineering societies to $2500 for corporations/corporate groups.   The group representatives will be able to connect with the student members at their table, answer questions and possibly even recruit potential summer interns!

FIRST Tech Challenge (FTC) is designed for students in grades 7-12 to compete head to head, using a sports model. Teams are responsible for designing, building, and programming their robots to compete in an alliance format against other teams. FTC has a strong history of merit-based team advancement at all levels of the program. Top teams advance from local qualifiers to the state/regional Championships and then to one of 4 Super-Regional Championships before heading to the FIRST World Championship.  We believe that it is important to reward excellence, and this advancement system is one way that our program does that.  The events will be highly visible and prestigious for teams to attend.

To learn more, you can visit   http://ftcwest.org/2014-2015-event-info/sponsor-info/celebrating-diversity-in-tech/

Have questions,  email to Jill at ftc@playingatlearning.org

THANK YOU!!     We are also still looking for event sponsors as well as companies that could offer a “tour” for the high schoolers to visit on Thursday 3/26 (afternoon or later) and Monday/or  3/30 (mostly morning).