Accessbility@ICRA2022 and OhmniLabs provided three OhmniBots for the conference, allowing students, faculty and interested industry members to attend the expo and poster sessions. The deployment of telepresence robots was greatly appreciated by everyone, from people with medical conditions or visa issues preventing them from attending, to people who were able to sample a little bit of the conference as an introduction, including future conference organizers.

There were more than 60 requests to “Tour ICRA 2022 via Telepresence Robots” from as far away as Africa, India, Asia Pacific, Australia and Europe, as well as across the USA. 24.6% of requests came from interested industry people, with an additional 1.8% from the investment community, 1.8% from the media and 5.3% was interest from the general public.

ICRA 2022 General Chair George Pappas commented that “​​The telepresence robots were a big hit! It added a very nice innovation and was discussed very positively on social media, particularly from registrants that could not make it.” 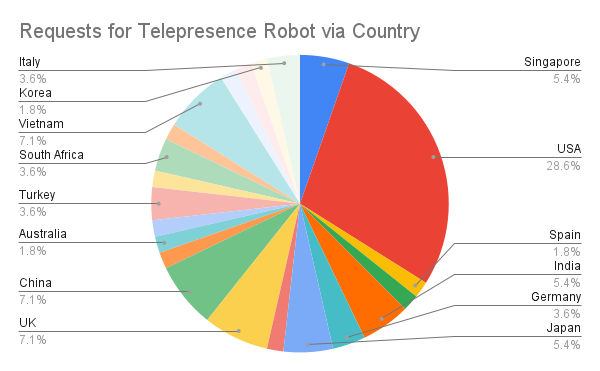 Thuc Vu, the CEO of OhmniLabs, the company that provided ICRA with telepresence robots, was delighted to see a conference that was taking a meaningful step for people with accessibility issues. OhmniLabs provide telepresence robots for hospitals and schools as well as for manufacturing or workplace settings and have seen first hand the difference that having a physical ‘body’ and the ability to move around makes in the experience, compared to a video call.

One ICRA researcher presented their poster session via robot, and several faculty who couldn’t attend in person were able to be there for their student’s poster sessions. 12.5% of the requests for telepresence robots came from people who had a paper or poster accepted at ICRA but couldn’t travel. PhD Student at The Sydney Institute for Robotics and Intelligent Systems (SIRIS) at Sydney University, Ahalya Ravendran said,

“Did I tell y’all I bot-suit myself for my conference #ICRA2022 poster session? @RobotLaunch was kind enough to allocate a slot for me during my poster session and oh I had a lot of fun touring with the telepresence robot, via @OhmniLabs” 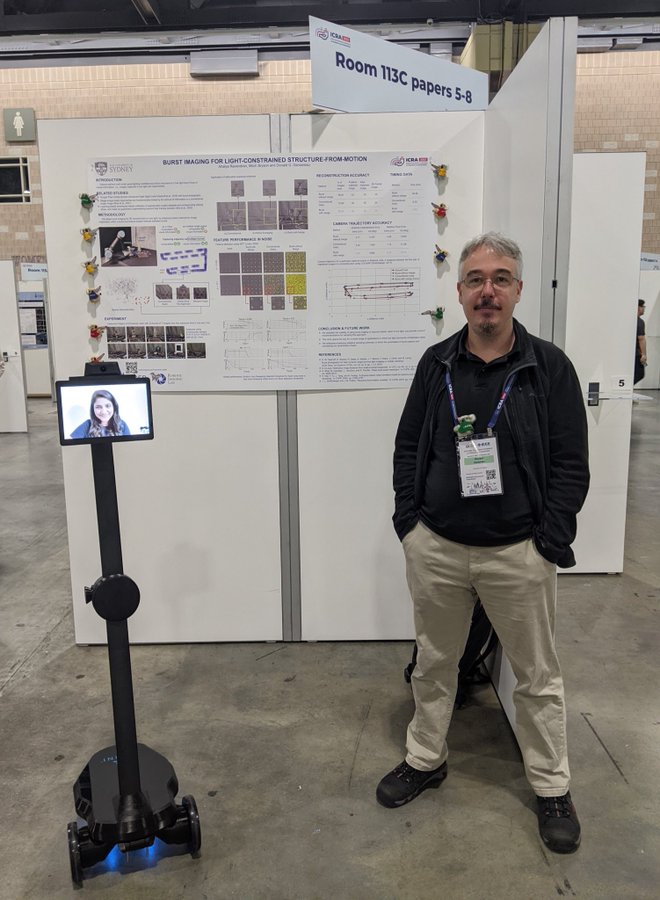 Sabine Hauert, Publicity Chair at ICRA, President of Robohub and Associate Professor of Swarm Engineering at Bristol University was unable to attend ICRA in person due to pregnancy, but she still visited her student’s poster sessions and explored the conference Expo, saying

“That was fun! The height of the telepresence robot is even accurate 😉 Thanks @OhmniLabs, @RobotLaunch and @ieee_ras_icra for making it possible for this very pregnant lady to attend #ICRA2022 remotely. Congrats on the nice work @m_alhafnawi.”

“Such an amazing surprise having @sabinehauert visit my poster remotely at @ieee_ras_icra! I presented MOSAIX, a swarm of expressive robot Tiles that we designed & built. Work done with Sabine, @DrEdmundHunt, @skadge & Paul O’Dowd. Check out photos from both perspectives #ICRA2022” 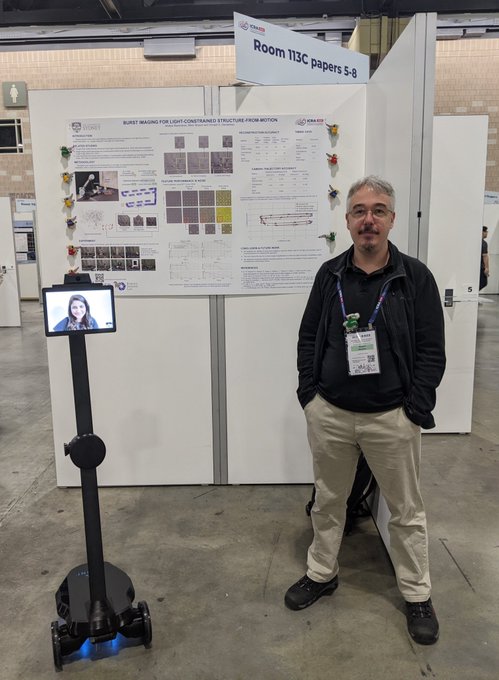 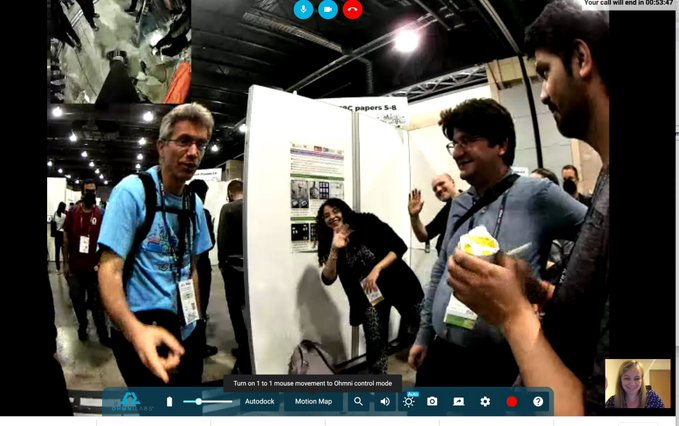 Specially Appointed Assistant Professor at Tohoku University in Japan, Seyed Amir Tafrishi said, “I was lucky to join #icra2022 physically by my avatar robot, where two of our papers will be presented. Thanks to #Ohmnilabs for the fantastic experience with the telepresence robot! It was a great experience to talk with different experts. P.S. Person on the robot’s screen is me! :))” 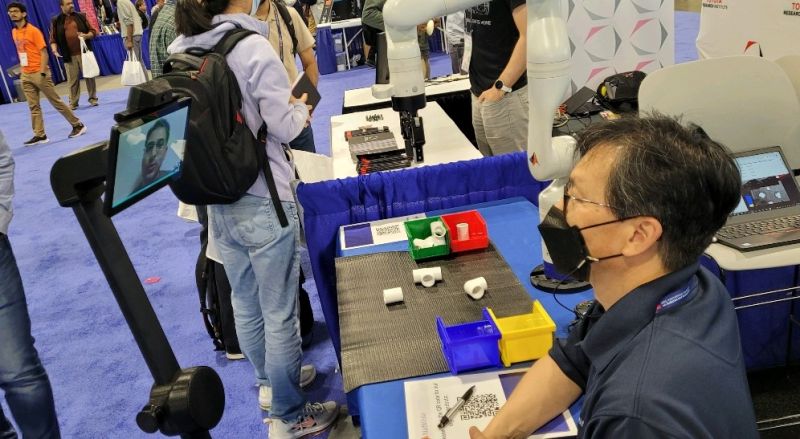 Many people gave us additional information to help us understand why they wanted to access ICRA via telepresence robots, ranging from people stuck in war torn countries, to economic or visa difficulties traveling from some parts of the world. Corporate policy contributed to several people’s inability to attend in person, as sustainably minded companies seek to minimize their carbon impact. 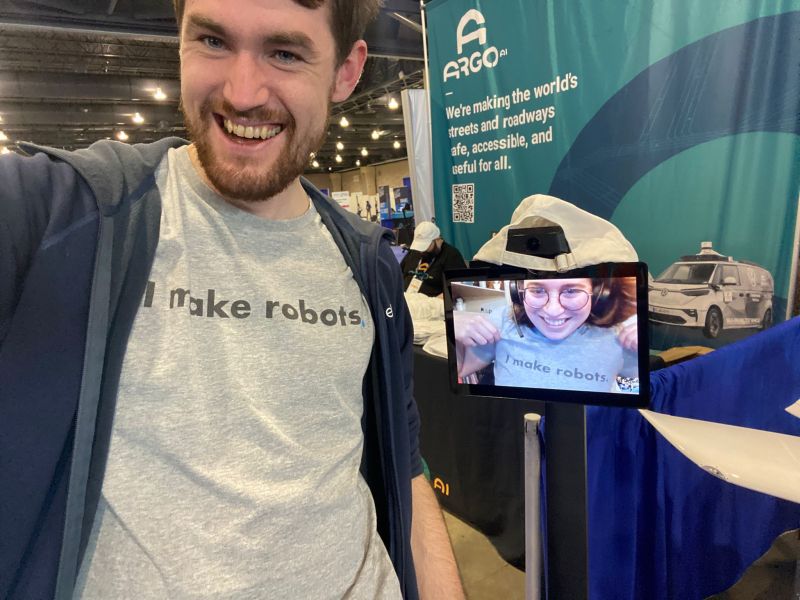 There was also interest from roboticists researching the telepresence experience as well as from future robotics conference organizers. And there were a wide range of medical reasons underpinning the requests for telepresence. Some medical issues are temporary conditions but some roboticists have permanent conditions requiring accessibility support. As telepresence robots become more of the norm, we will be helping to empower researchers who are otherwise isolated from the rest of the community. 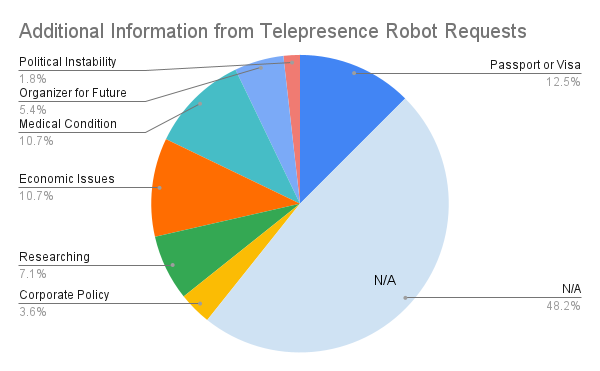 Kavita Krishnaswamy is a Google Lime Scholar and Microsoft Research Fellow, with a Ford Foundation Predoctoral and National Science Foundation Graduate Research Fellowship. She is currently a Ph.D. candidate in Computer Science at University of Maryland working with Dr. Tim Oates. Kavita was one of the researchers who was only able to attend ICRA through the use of a telepresence robot, due to her permanent medical conditions.

Kavita was interviewed by Robohub attending ICRA 2015 via telepresence robot and was excited to hear that IEEE RAS and OhmniLabs are working on making telepresence a permanent conference feature.

And of course, without dedicated volunteers managing the robots and helping visitors maneuver around the conference, we wouldn’t have been able to do anything. Many thanks to everyone who volunteered, the visitors who shared their experiences with us, and to the team at OhmniLabs for their generosity and support.

Interested in getting an Ohmni yourself? Reach out to Ohmni team at sales@ohmnilabs.com. 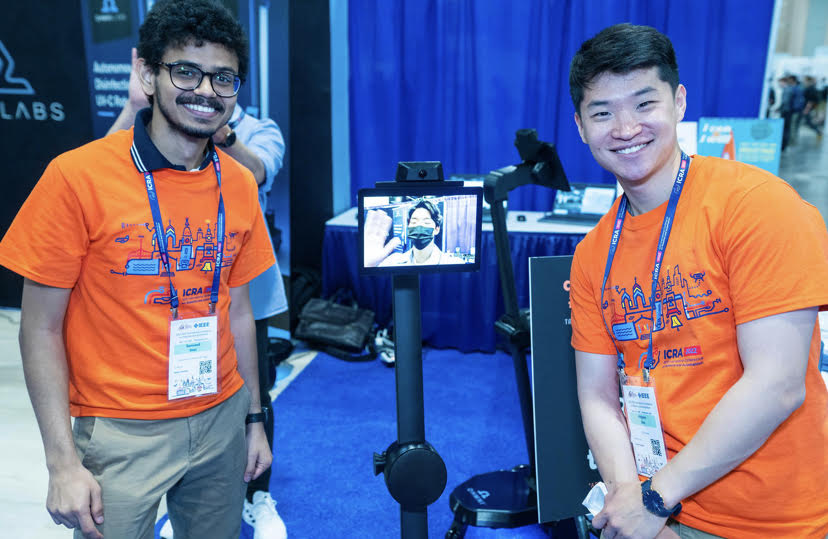 Links to original tweets or posts used in the report: