Many advances in our technologies occur through borrowing capabilities from one field to progress another. Our technological universe is built from a web of interrelated advances that push one another forward.

The practice of Enterprise IT is being transformed by a variety of innovations that emerged in the last decade. Vendors who have traditionally sold into this space are struggling to adapt. They are facing the Innovators Dilemma,[1] largely captive to their traditional business models.

We can expect a similar dynamic of disruption for the field of service robotics. Cloud computing, Software as a Service, and mobile connectivity represent an important competitive opportunity for every robotics-focused company, and the future of the service robotics industry is inevitably one of Robotics as a Service.

With each new generation, the weight of innovation and market momentum shifts. The latest generation is wrought from a mix of technologies that include cloud computing, Software as a Service, ubiquitous wireless connectivity, and universal end points.

Cloud computing is the notion that computer hardware is no longer something that everyone needs to purchase. Instead, compute cycles can be purchased from a centralized resource. One example of this is Amazon’s Elastic Compute Cloud (EC2) which in 2014 had more than one million customers and was growing at 99% year on year.[2] EC2 is a type of “Infrastructure as a Service” (IaaS).

Software as a Service (SaaS) leverages the centralization of Cloud Computing with a targeted application offering, generally solving the whole of a business problem, whereby a company or individual can purchase a complete solution without needing to deal with servers, with installation, nor maintenance. This approach is increasing in popularity with IDC estimating $50.8B in revenue by 2018 up from $22.6B in 2013 on Enterprise SaaS applications.[3] SaaS ranges from collaboration technology like Citrix Gotomeeting to CRMs like SalesForce.

Ubiquitous wireless connectivity is about the degree to which every new device is connected wirelessly to the internet and is a significant shift in comparison to only a few years back. While wireless connectivity has been possible for a long while, smartphone adoption is now at over 64% of the US population,[4] assisted by massive increases in wireless data reliability, coverage, and speed.

Smartphones have taken over as the primary Internet connection point for most people, and even most businesses. Whereas connected end-points had for several decades been mainly desktop PCs, the emergence of Wi-Fi brought Laptops into dominance, and smartphones have since taken over. The expectation is that Internet Connected devices (the Internet of Things) will dwarf even the number of smartphones with 50 billion connected objects estimated by 2020.[5]

The combination of cloud computing, mobility, and ubiquitous connectivity is transforming Enterprise IT, and will impact a huge number of other industries. One symptom of this is the unprecedented number of startups emerging to reform almost every industry.[6]

Robotics is undergoing a similar transition, but from a different base. In this case, it’s enabled
by rapid reductions in the cost of components, innovation in physical artifacts, and all of the shifts in the cost and availability of compute cycles. Some of this has been explored over recent years as “cloud-robotics” for shared learning and offload of compute intensive tasks, and is now seeing practical implementation.

• Device 27 is two feet tall, and specialized for leather cutting. It’s a core component in a production line in ShoesRUs, a small shoe factory in Portland, Oregon. After several months of unimpaired operation, Device 27 identifies early signs of a burn out in its motor three.

• Device 27 is part of a whole of life service offering from FactoryRobotsCo, designed to address all the needs of a small local factory in the new “on demand” world of retail. The factory has no margin for downtime, and needs the service to “just work.”

• Device 27 coordinates it’s own preemptive replacement and Device 27a arrives by self driving Uber or Amazon drone delivery and slots into Device 27’s role while Device 27 returns to base for maintenance.

This is not realistic in the near term, but consider the following elements.

As with today’s Software as a Service offerings, this solution can now integrate global best practices. In this case for running local robots. Local installation and maintenance are controlled by FactoryRobotsCo, and the owner of ShoesRUs need not maintain a large technical staff, nor incur large consulting fees.

Let’s consider some parallels between the changes in how we use computers in business with similar changes in robotics. 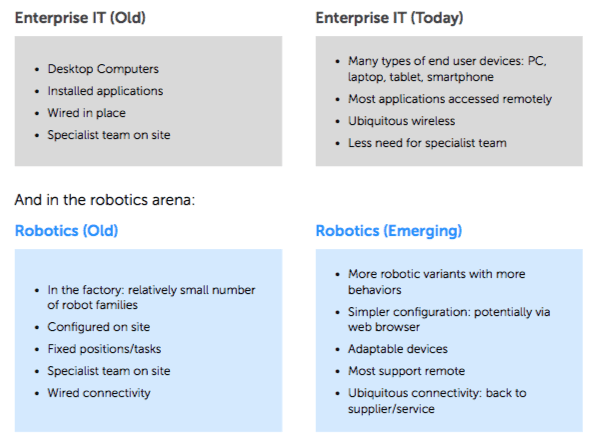 In the same way that every business is now leveraging SaaS and cloud for IT, every business will be able to leverage SaaS and cloud as part of service robotics solutions. The first steps toward this future are already visible – some have been around for a while, some are emerging today – such as Rolls Royce and Tesla.

Once upon a time, Rolls Royce was famous just for their engines. Now Rolls Royce sells “propulsion” or “power by the hour” not engines.

Rolls Royce claim to have real time connectivity to every one of their engines as they fly around the globe, to collect a huge amount of performance and maintenance data and to ensure that maintenance is driven on an “as needed” basis rather than merely to a schedule. They also charge by the mile.

Tesla is another great example of putting service in the driver’s seat of their business. These cars are sold as a whole of life experience, with a focus on “ongoing delight.” Many argue that the rest of the industry will need to follow.

It’s been a perfect storm for Enterprise IT, and the accumulated capability represents a perfect storm for Robotics. This is a shift of power from local technologists calling the shots in the factory/workplace, to a world where capabilities are much more available: in the cloud, on demand, as a service. 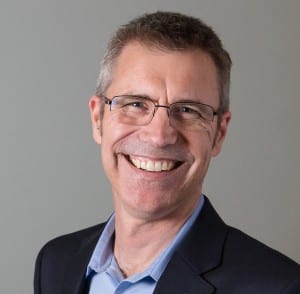 Dr Michael Harries is an angel investor and advisor working with a range of high technology startups. Until recently he was Chief Technologist at Citrix Startup Accelerator, using open innovation and investment in early stage startups to better understand emerging trends in computing. His primary focus is on cloud computing, enterprise infrastructure computing and the future of work, including the fields of robotics, machine learning and AI.

The rest of our free report is AVAILABLE HERE — or in instalments at Silicon Valley Robotics — featuring case studies and analysis from industry experts and investors; OATV, Citrix Startup Accelerator and Konica Minolta Business Innovation Center.