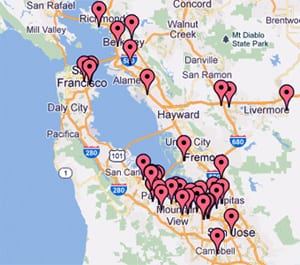 “Fostering the growth of startups is vital to being a viable tech cluster”
By Andra Keay, Managing Director
Silicon Valley Robotics is the cluster, or non-profit tech hub organization, representing both established robotics companies and newly emerging robotics startups and entrepreneurs. From the early days of radio to the rise of the computing revolution, Silicon Valley has been a center for innovation in technology. Accounting for more than one-third of venture capital investment in the US, Silicon Valley is a small region with extremely big impact [1].

We believe that fostering the growth of startups is a vital to being viable tech cluster.

As the Kauffman Foundation recently reported [2], longevity and growth in tech clusters is most closely linked to the density of companies in the area than to the presence of research facilities, economic infrastructure or even entrepreneurial culture. Simply put, the more commercialization there is in a cluster, the more the cluster is able to support an entrepreneurial culture.

“The convergence of low costs and new manipulation technologies is part of an ecosystem that is going to drive innovation in the next three to five years. “[3]

Rich Mahoney, Director of Robotics at SRI International and the President of Silicon Valley Robotics, believes that robotics is surfing a wave of commercialization with two converging opportunities for robotics businesses to develop. This will strengthen the potential returns for robotics companies in a wide range of verticals.

One driver for robotics growth is the availability of lower cost components and sensors driven by growth in the personal and mobile computing markets. Mahoney says, “Robotics is drafting off the last 30 years of evolution of personal computing technology, and represents the next stage in that evolution.”

Another emerging track is robotic manipulation, arms and hands that physically manipulate the world. As Mahoney says”

“Right now there are a lot of affordable mobile and telepresence robotic solutions but they all lack manipulation. DARPA has invested an incredible amount of money into manipulation research, and when we see platforms emerge that are accessible to the entrepreneurial, hobby-level roboticists, that’s when we’ll start to see a much broader dissemination and application of robotics, into a personal robotics market, similar to what happened in the early 1980s with personal computing.”

Silicon Valley Robotics aims to support innovation and commercialization in robotics. Some of our initiatives are in outreach, networking and recruiting but many are directly aimed towards nurturing startup growth, from our investor showcases to our new startup series.

We see our role as growing a startup community, a virtual accelerator that complements the growing number of hardware accelerators in Silicon Valley.

For example, our startup series launched with a panel discussion on “Manufacturability” held at Counsyl in South San Francisco and sponsored by PCH International’s Highway1 accelerator.

Frank Moreman, COO of EksoBionics, Nick Pinskton, founder of Plethora and CloudFab, and Kyle Lapham, Director of Automation at Counsyl, all spoke about challenges and solutions in manufacturing, and transitioning from prototype to product.

The topic and speakers were picked by our startup working group. This means the topics are relevant to what the local robotics startups need right now and it leverages the resources they’ve found useful.

The audience was highly engaged in the discussion, both with the panelists and each other, which in turn leads to an active peer mentoring network for robot startup founders.

Startups are vital to a healthy tech cluster and Silicon Valley’s strength is in our startup culture, alongside a strong local economy and proximity to many world leading research facilities. California’s is poised to become the 8th largest economy in the world on the back of strong jobs growth [4].

The Bay Area alone has 2.4% of US jobs, including 10% of software jobs, 8.1% scientific research and 12% of the computer/electronics manufacturing ones.

Organizations in the Bay Area held 16,264 patents in 2010, which was more than double the number held by the next ranked region, New York. Silicon Valley has the highest percentage of college graduates in the workforce (44%) and the highest share of jobs in innovation sectors (18%) [5].

“The increase in early stage investing is an encouraging sign that entrepreneurs with innovative ideas can get the funding they need to succeed,” remarked Mark McCaffrey, global technology partner and software leader at PwC US.  “ In particular, startups that are able to drive innovation by developing disruptive technologies that are easy to deploy and deliver ongoing value to the user will be of great interest to venture capitalists.”

It’s still harder for a hardware company to get started as they usually need a longer runway and greater investment during early development and prototyping. While a robotics startup may also need a larger Series A round, the evidence suggests that a robotics company with serious early stage investment is much more likely to get to Series A, then B and C.

Where software and startups really know how to succeed

For example, 3D Robotics has just closed a $30M Series B round after a $5M Series A round in 2012 and an undisclosed seed round. Romotive closed Series A in 2012 of $5M after $1.5M seed funding, including Tech Stars Accelerator, the Foundry Group and Kickstarter campaigns generating $284K on Kickstarter.

They are blurring the line between seed funding and Series A as they go from prototype to production and sales, or preorder, on the strength of their seed round before getting to A.

Silicon Valley has been innovative in robotics ever since, Shakey, the world’s first mobile robot was created here in 1966. But our dynamism and innovation now comes at the intersection of a vibrant startup ecosystem and robotics.

Silicon Valley is the place where software and startups really know how to succeed and we’re translating that back into robotics, both as startups doing software for robotics and as innovation in the way robotics companies get started.