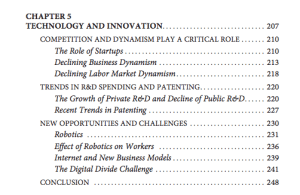 For the first time, robotics has featured in the annual Economic Report of the President. The hefty 435 page report from the President and the Council of Economic Advisors was released to Congress on Feb 2016. This shows the increasing importance of robotics in world economic strategy. On the whole, the report found that productivity and labor growth were significantly increased via robotics, which accounted for 10% of GDP growth and 16% of labor productivity growth, in spite of a climate of job loss anxiety.

“In 2015, we continued to take steps forward, with strong job growth and wages rising at their fastest rate in the recovery. Here in Washington, Congress came together to pass a budget, secure long-term transportation funding, reform education laws, and make tax cuts for working families permanent. So claims that America’s economy is in decline or that we haven’t made progress are simply not true. What is true—and the reason that a lot of Americans feel anxious—is that the economy has been changing in profound ways, starting long before the Great Recession. Today, technology doesn’t just replace jobs on the assembly line, but rather affects any job where work can be automated. Companies in a global economy face tougher competition from abroad, and they can locate anywhere. As a result, workers have less leverage for a raise. And more and more wealth and income is concentrated at the very top.” [President Obama, Economic Report of the President 2016]

Overall, the Economic Report is very startup and technology centric, with calls for open internet, open innovation, and open immigration. “Immigrants accounted for about one-quarter of U.S.-based Nobel Prize recipients” … “24 percent of all patents originating from the United States are authored by non-citizens”.

And although the report lauds startups as the engine of economic growth, it also points to declining dynamism in the US, with the rate of venture investment dropping and the number of new firms created in decline over the last 40 years. After looking at the underlying metrics of entrepreneurship and innovation, the report takes a deep dive into two specific technologies that will shape the future; robotics and internet communication technologies. 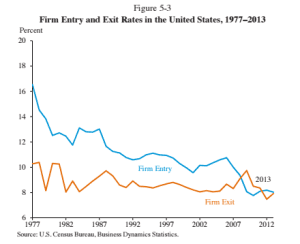 “Startups are vital to productivity growth in the United States. Startups are often the way in which a new product or service is first brought to market. A case in point is the small company that Bill Hewlett and Dave Packard founded in a garage in Palo Alto in 1939, which commercialized an early version of an electronic oscillator, a vital component in electronic devices. Hewlett and Packard’s inventions, along with those of multiple other electronics inventors, helped spur the information technology-fueled productivity rebound in the mid-1990s, which saw average labor productivity growth jump more than a percentage point to 2.4 percent a year (Jorgenson and Stiroh 2000; Oliner and Sichel 2002). ” [p 210] 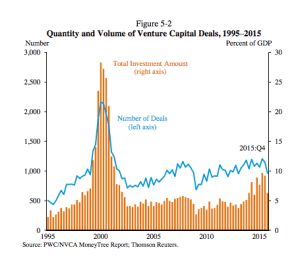 The declining investment figures are considered in a broader economic landscape of slowing productivity, and it’s worth considering that the recent increase in investment in Silicon Valley has a lot to do with foreign capital. Jason Furman, the Chairman of the Council of Economic Advisors also states that the contribution of capital to productivity growth has decreased significantly. (Furman 2015)

While Federally funded R&D has declined, over the last 10 years, private investment in R&D has increased, with the manufacturing industry in the lead. 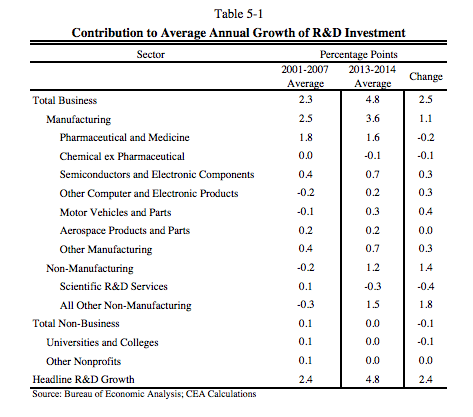 “Private business accounts for virtually all of the recent growth in R&D. Nonprofit institutions like universities had a negligible impact on growth. The manufacturing sector is an important driver of R&D. In 2013 and 2014, manufacturing accounted for roughly 75 percent of R&D growth and non-manufacturing accounted for the other 25 percent (see Table 5-1). Two manufacturing sectors that have notably improved relative to the pre-crisis time period (2001–2007) are semiconductors and electronic components and motor vehicles and parts. In addition, manufacturing employs 60 percent of U.S. R&D employees and accounts for more than two thirds of total R&D volume in the United States. Manufacturing is also responsible for the vast majority of U.S. patents issued (Sperling 2013).” [p221] 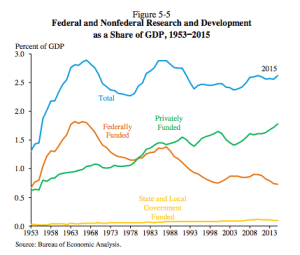 Increasing patent litigation also seems to account for declining innovation and entrepreneurship across the US (Morton and Shapiro 2014), with a decrease in the number of first time patent applications, as opposed to serial patent filers. Venture capital investment is also found to decrease in fields of increased patent litigation (Kiebzak, Rafert, and Tucker 2016).

This chapter of the report concludes with an in-depth evaluation of the impact of two new technology areas, robotics and internet communications technologies.

The report also considers the challenges associated with each of these technologies. While both technologies clearly have the potential to have an uneven impact on society, robotics is still seen primarily as a labor issue.

“More specifically, in the area of robotics, this section explores concerns that increased automation in the workplace threatens to displace elements of the conventional labor force. It is important to keep in mind that, while growing quickly, robotics are not poised to affect every area of the economy or replace human labor. Nonetheless, robotics still have the potential to be highly consequential for firms and, more broadly, for productivity.”[p 236]

Whereas, internet communications technology is seen as having two hot spots, the on-demand economy and the digital divide. Even though the on-demand economy has already shown the potential to have a much greater impact on the labor market than robotics and automation, it is a more invisible ‘enemy’.

“The rise of the so-called on-demand economy—enabled by mobile Internet applications—also has the potential for productivity and welfare gains but could possibly lead to worker displacement, a prospect that is examined here as well. This section also emphasizes the need to narrow what is commonly called the digital divide—the gap between those who can access the Internet and those who cannot—so that all may share in its benefits, the existence of which is well-supported by empirical findings in the economics literature.”[p 236] 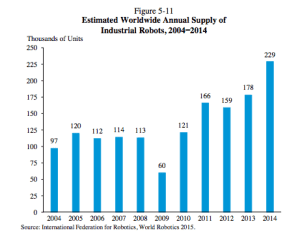 Growth in robotics has doubled since then, according to the International Federation of Robotics (IFR). This is bound to be a conservative measure, due to the difficulty of accounting for increased robot sales in non-traditional industries.

The number of patents granted with Robot class has doubled in the last 5 years after a relatively flat decade. At present, there is little evidence of concentrated patent ownership, which is positive for entrepreneurship and implies healthy competition leading to more innovation and lower prices. Lower prices will allow more downstream firms to acquire robots, thus driving productivity growth further. On a cautious note, intellectual property ownership may be a source of concern.

As regards the labor issue, this report provides an excellent contextual compilation of the latest studies in the area, generally with positive findings. However, many of the cited studies conflate robotics, automation and computerization. Understandable in the context of broad societal fears of job loss due to the historic reduction of manufacturing jobs leading to a declining employment rate for men 25 to 54. However, the occasional conflation of computerization, automation and robotics leads to biased or inaccurate figures and undermines the expectations of job vulnerability.

Historically, as waves of technological innovation displace workers, productivity increases, wealth increases and more jobs are created. Most economists agree that robotics is increasing productivity, so the discussion relates primarily to where the wealth and job growth will occur (Piketty 2013).

Will robots complement labor or substitute for labor? If the latter, will workers have sufficient bargaining power to share in the productivity gains?

“One of the few studies in this area finds that higher levels of robot density within an industry lead to higher wages in that industry (Graetz and Michaels 2015), suggesting that robots are complements to labor. The higher wages, however, might be due in part to robots’ replacing lower-skill workers in that industry, thus biasing wage estimates upwards.”[p242]

Previous waves of automation show a pattern of complementary job creation, with new work roles emerging to support and maintain the new technologies (Autor 2015). The transition from horse to car saw the reduction of occupations like hostlers and farriers, and the development of new occupations like gas station attendants and auto-mechanics. Keynes (1930) coined the phrase “technological unemployment” to describe the period of change, as society struggled to shift labor into newly created positions.

If jobs are reallocated by automation, then no one seems to agree on which jobs will be lost. Autor and Dorn (2013) point to middle-skill jobs, ie. bookkeepers, assembly-line workers. The authors also believe that the labor market has become increasingly polarized away from middle-skill jobs, and that high-skill jobs are less likely to be automated as they require problem solving capabilities, intuition and creativity. This viewpoint is under threat from AI however – again conflating the differences between robotics and AI, automation and computerization.

“Frey and Osborne (2013) argue that big data and machine learning will make it possible to automate many tasks that were difficult to automate in the past.”[p243]

Perhaps a simpler way of looking at the overarching issues is that you can now find studies to support a wide range of viewpoints on the future of work, robotics and automation.

“The Administration’s latest Strategy for American Innovation, released in October 2015, details three key areas of investment that the government can pursue to ensure that the United States retains its innovative edge in the decades to come by: 1) continuing to invest in Federal R&D and other building blocks for future private sector scientific and technological breakthroughs; 2) advancing Federal efforts in national priority areas like precision medicine and advanced manufacturing; and 3) improving the Federal Government’s capacities for innovation.” [p254]

The Economic Report of the President sets the scene for the next decades of revitalization of US manufacturing with robotics, and the emerging transfer of robotics technologies into the service and business sectors to support society in areas like agriculture and the ageing population. While there will be stress points, there is much to be gained, including maintaining innovation and economic growth.