The “Top 50 for 2013” from Robotics Business Review’s RBR50 list is dominated by companies from California, particularly Silicon Valley. RBR, a division of EHPublishing released their second RBR50 list on Monday and not only are US companies considered the most influential and interesting to watch, but California companies top the list, as they did in the 2012 watch list.

The RBR50 aims to be a list of the ‘most influential public & private companies in the global robotics industry’. It is compiled by RBR editors based on submissions received. Factors assessed are innovation, groundbreaking application, commercial success and commercial potential. 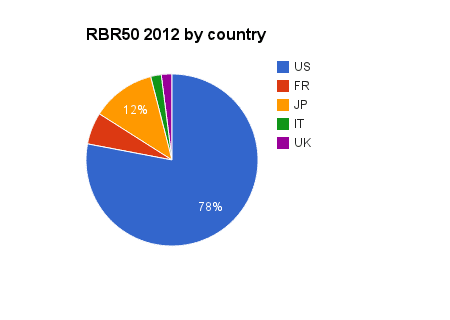 This US centric view may be the result of sample bias, as Robotics Business Review is based in Massachusetts. However, although MA companies perform very strongly in the RBR50, the even stronger showing from California suggests it is not simply sample bias. Even better, the top California companies have changed from 2012 to 2013, with only 7 companies listed in both years and 6 other companies listed in either 2012 or 2013. All of this indicates a very healthy and dynamic local robotics industry.