Lemnos has gone from being a maverick hardware accelerator to a powerhouse VC firm, bringing to market a whole range of enterprise robotics and hardware startups, like Airware, Revolution Robotics, Marble, Momentum Machines, and Simbe Robotics. Jeremy Conrad gave a rundown of the 5 reasons why the time is right for robotics on July 27 at the opening of the new Silicon Valley Robotics Cowork Space in San Francisco at ReadWrite Labs. You can also read the interview we did with Jeremy for the 2016 SVR Service Robotics Report.

What’s the story behind Lemnos?

In 2011 we were thinking about starting a hardware company and realized that there was no one funding early stage hardware. And so, in the classic entrepreneur fashion, when you find a problem that hasn’t been solved yet, you start a company to solve that problem. So that’s what we did. Lemnos is an early stage venture capital fund that only invests in hardware companies. We currently write checks between $250,000 – $500,000 for very early stage companies, though we can fund up to $1,000,000 and co-lead seed rounds.

At the time you started Lemnos in 2012, was anyone else supporting the hardware ecosystem?

At the time there really wasn’t anyone else out there. VCs were all saying the same thing: hardware takes too long, and it takes too much money. We thought there was a unique opportunity because we knew the costs of starting a hardware company had dropped dramatically, and the speed with which hardware companies were emerging had radically changed.

So you believed there was an opportunity that the traditional venture world was missing?

Absolutely. Over the last couple of years attitudes have changed, and hardware is certainly very much back in a big way; we see that in the amount of money our portfolio companies have been subsequently able to raise. On top of that, between advances in robotics, and startups like FitBit and GoPro, there’s now a lot of interest in the sector. 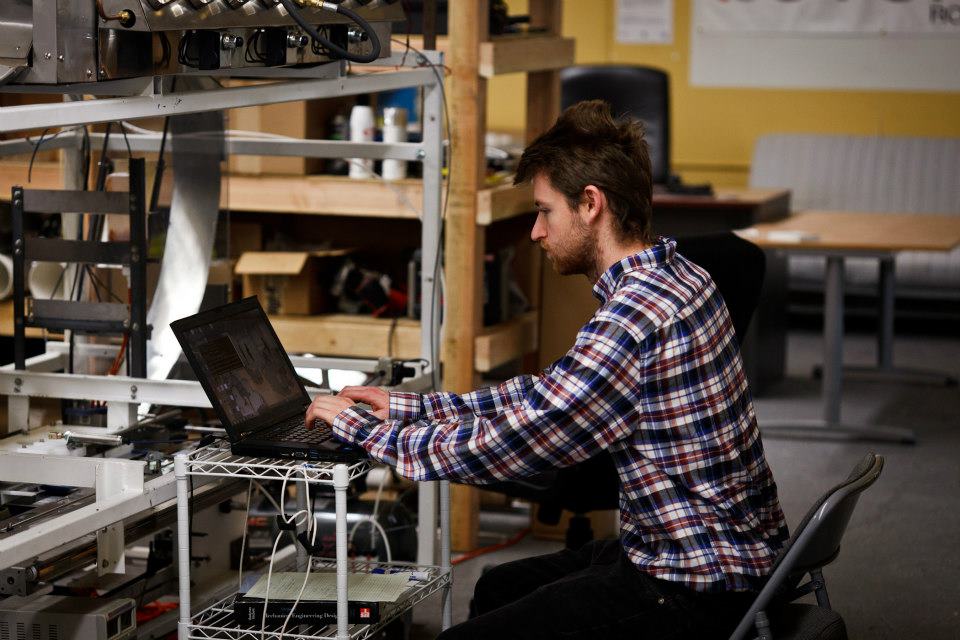 Two of our early companies that are now doing really well are Spire, which makes small satellites, and Airware, which is a drone company.

We’ve been in four drone or drone-related investments, and we are still interested in the sector but I’m not sure if we are going to make another investment any time soon because it’s a pretty crowded market now.

The one area that we are investing in recently is robotics, and I’m really excited. I think robotics is on the cusp of opening up and having some great breakout companies.

What areas do you see those breakout companies coming from, or moving into?

We focus a lot of our investments on industrial or commercial robots. I think personal robots are still a little far off at this point — the technology is not quite there and the price point is still a little too high.

We are investing in a company called Momentum Machines, which is a hamburger-making robot, and in another company called Simbe, which works on inventory for retail. I think these kinds of environments are better suited for robots right now, in part because they’re more structured. The layout of a store is controlled and comparatively standardized, whereas the layout of a home can be a little chaotic and difficult to navigate.

Aside from the technological drivers that are making robotics interesting, are you also seeing market pull or market readiness?

It really depends on the sector. For example, Amazon was very early with their purchase of Kiva, and that has driven a lot of others into that sector. Other sectors are much more slow-moving in their adoption of technology, but I think that if they don’t embrace robotics they are going to have a hard time competing in the future.

Aside from warehouse and logistics, are you seeing any other sectors embracing robotics?

The industrial sector. If you look at big industrial conglomerates like GE, they have a lot of jobs that are very difficult, or very dangerous, and they are looking closely at robotics to help out with their capabilities.

It’s also something we are starting to see in the service sector. I mentioned Momentum Machines earlier, but there are a number of other startups coming forward. Eatsa, for example, is trying to innovate how you actually interact with the restaurant at the very core. I think you’re going to see a lot more startups in those areas.

One big change to the robotics ecosystem is that large companies are now putting robotics on their strategic roadmap, and we are seeing a lot of very well-funded robotics research and development centers opening up. Do you think that innovation and entrepreneurship is going to shift over to these large companies with big bankrolls and better market partnerships? Or do you think that small startups will still have the opportunity to do groundbreaking work?

I’m certainly biased, but I think startups always have a shot at displacing the ecosystem, and I would argue that now more than ever. There’s so much money in the venture ecosystem. If you have a startup that’s on the right path, there are all sizes of checks available to help you execute and go down that path — from $5 million to $5 billion.

The other factor is that it is structurally difficult for many of these large established companies to shift their business model and business practices in a way that embraces robotics. Incumbents should always be worried about startups coming for them in a variety of different ways.

At our core we are very hands on. But robotics companies tend to need a lot of help in understanding the business model and the ROI. I think that ‘Robots as a Service’ is definitely here to stay, and that very few companies will make it in the venture ecosystem simply selling robots. But to add value, they need to understand their cost basis and their maintenance plan … what it takes to service a robot. So much of our work with robotics companies is on the actual business: how do you make this a good venture-backable company? 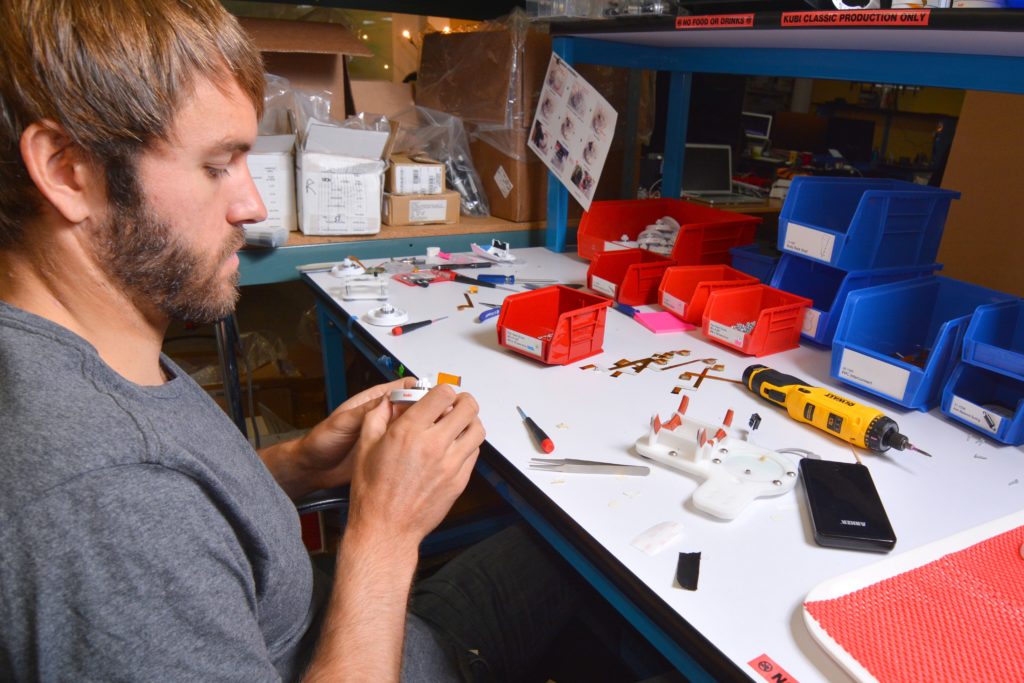 What are some of the startups that excite you at the moment?

Some really interesting startups we are working with include Simbe, and also Marble, which is working on delivery robots. If you look towards self driving cars, you realize that delivery robots can completely change the structure of the world. Fleets of delivery robots pose a really challenging technical problem that is on the cutting edge. I’m excited to watch that team go out and take the problem on.

How does a startup get in to Lemnos, and what kind of startups are you looking at?

We typically look for two- to three-person teams, although we will consider larger teams of up to eight or nine people if they are working on great hardware products. It’s easy to get in touch with us — jeremy@lemnoslabs.com — if you want to pitch. We are looking for starting teams that have a good blend of technical expertise, and which have either built a company or worked in a company, so that they really understand how their business could operate.

  What’s made robotics an interesting place to be investing in?

One thing that has made it very possible for robotics startups to succeed is that the stack
got shorter. As components have become more integrated and easier to use, and as ROS has propagated, we are seeing smaller teams be able to execute. What used to take 10-, 20-, or 30-person teams can now be done with teams of just 3 or 5 people. That’s almost an order of magnitude improvement. That’s the checkpoint that makes robotics such an interesting area to be investing in right now.

You can also read the blog posts and listen to Lemnos Labs podcasts:

Silicon Valley Robotics is the industry group for robotics and AI companies in the Greater San Francisco Bay Area, and is a not- for-profit (501c6) that supports innovation and commercialization of robotics technologies. We host the Silicon Valley Robot Block Party, networking events, investor forums, a directory, and a jobs board, and we provide additional services and information for members, such as these reports.

WE’LL BE RELEASING ADDITIONAL ESSAYS FROM THE REPORTS EVERY WEEK OR SO. OR READ FULL REPORTS AT https://svrobo.org/reports