Robotics is finally stepping out of science fiction and into service, if not in our homes, then at least in our hotels, hospitals, restaurants, warehouses, hardware stores and other retail outlets. This new report series from Silicon Valley Robotics highlights the first steps of startups Fetch Robotics, Fellow Robots, Savioke and Adept into the emerging service robotics industry, with additional analysis contributed by industry experts.

The service robotics industry has long been the subject of science fiction, with robot maids, like Rosie from the Jetsons, or cleaners, like Wall-E. Or medical assistants and all round helpers like Baymax from Big Hero 6. Baymax was actually modeled on the latest in soft robotics research, but there’s still a big gap between research and commercialization. So far there have been very few successful service robotics companies.

The International Federation of Robotics defines service robotics as “a robot that performs useful tasks for humans or equipment excluding industrial automation application.”[2] While in general, industrial robots tend to be large arms or gantries and service robots tend to be smaller and mobile, the definition has been dependent on the end application rather than the pure form or function of the robot. The IFR continues to refine the robotics definitions and track the industry statistics.[3] 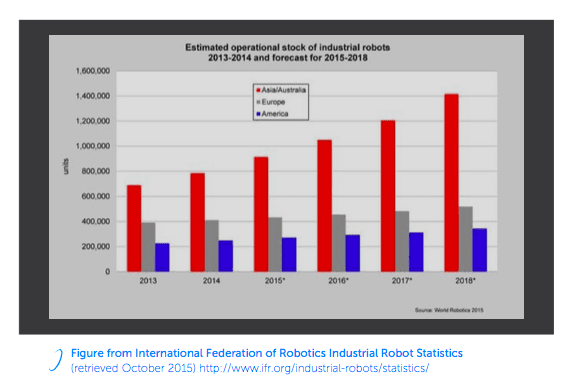 However, the service industry is also growing strongly and encompasses all of the new market areas not already defined as industrial robotics. It is hard to accurately predict growth here when there is such potential for rapid growth as costs drop, new systems are introduced and new suppliers start to proliferate. 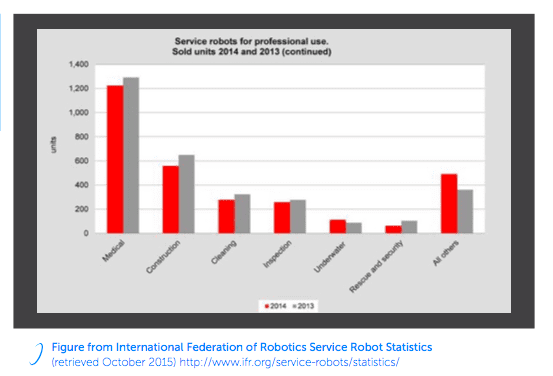 The IFR has tracked overall annual growth at around 11.5% so far and projects more than 20% annual growth to come in the service robotics industry. But some niche areas have already demonstrated growth of between 150% (mobile platforms) and 650% (assistive technology) in the last year. The primary market areas for service robots so far have been in defense, field (agriculture and inspection), logistics and health/ medical applications.

One of the new categories to emerge in the last year is the humanoid helper, kiosk robot or retail assistant. The robotics companies featured in this report showcase some of these emerging opportunities.

Fetch Robotics provides mobile robots and mobile manipulators for ecommerce warehouse facilities. Fellow Robots provides mobile retail assistants for hardware stores. Savioke provides a delivery robot for hotels and is working on eldercare opportunities. Adept provides a general-purpose mobile base that can be utilized in many settings, including one application as a restaurant server.

The cost of service robotics systems is dropping significantly, putting service robots in reach of many new market partners. But these new market opportunities are also arising due to continual improvements in the safety and compliance of robot systems, alongside their more intuitive user interfaces.

What is also clear is that none of these robots replace workers, but they supplement work at critical bottleneck times/tasks or improve health outcomes making jobs more attractive, especially in areas where there is a chronic shortage or high turnover of staff.

At the end of the day, the value proposition for service robotics is in supporting workers to work better, faster and safer. But these new robot assistants offer a tantalizing glimpse of a reshaped work paradigm, where humans gravitate to managerial jobs, leaving more of the menial and repetitive jobs to robots.

The rest of our free report is AVAILABLE HERE — or in instalments at Silicon Valley Robotics — featuring case studies and analysis from industry experts and investors; OATV, Citrix Startup Accelerator and Konica Minolta Business Innovation Center.